Anne Hathaway is a fashion savvy agent in "Get Smart" 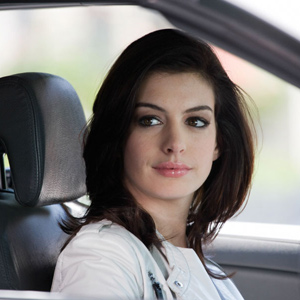 Anne Hathaway stars as Agent 99 in Warner Bros.' Get Smart. This action comedy is based on a TV series that aired in the U.S. during the 1960s.


After making a name for herself in The Princess Diaries, Anne Hathaway shot to stardom opposite Meryl Streep in the 2006 hit The Devil Wears Prada. Now, America's sweetheart stars as the ever-capable Agent 99 in Warner Bros.' new action comedy, Get Smart. Anne acts opposite Steve Carell and Dwayne Johnson.

Hathaway's portrayal presents Agent 99 as a confident, consummate professional, then takes it a logical step further. "She's not only a girl who could keep up with the boys," explains Hathaway. "She even sets the pace. But she never sacrifices her femininity—that, and her Chanel obsession. She revels in being a woman who can run and fight in high heels, who makes no apologies for being a woman nor asks for special treatment."

Hathaway claims to have won the role because "I managed to hold it together five seconds longer than the other actresses who read with Steve [Carell]. He is not easy to keep up with. But he taught me a lot about comedy and ad-libbing and he and [director] Pete Segal made me feel very protected from both sides of the camera."

Which leads us to the first question in the following interview:

Question: How was it to work with Steve? Was there a lot of improvisation going on?

Anne Hathaway: I just love to work and I'm kind of a hack. I'll just show up and do anything. But when you find that you can work with someone who is one of the great comedic masters of our time, it was a pleasure and an honor. It really helped that Steve's just a nice person. It was actually wonderful.

Q: What was your favorite scene in the whole movie?

Anne: What we shot in Red Square [in Moscow, Russia]. It was the last scene that we shot in the entire movie and it just felt like one of those things, when you know that it's going to be a really big moment in your life. And I'm with Steve and we have a Russian crew next to an American crew and one of the producers went out and bought us some McDonald's. So, we're sitting there in the middle of Red Square eating McDonald's and it was great. There's no funny story attached to it. It was just a beautiful moment.

Q: Did you watch past Get Smart TV episodes to study Agent 99?

Anne: Yes. I feel like a lot of women were influenced by Barbara Feldon and her portrayal of Agent 99 being a woman who had a very elegant sex appeal, who was obviously so intelligent, who was also kind and sophisticated. A lot of women were inspired by her. So, I feel our Agent 99 couldn't have existed without her original performance.

Q: [To Steve Carell who suddenly shows up.] How difficult was it to get anything done when working with somebody that looks like Anne Hathaway?

Steve Carell: Here's the thing about Anne Hathaway. She is, in person, really funny and kind and very, very goofy. She's really a goofball and she was like the only woman on the set for months-much, much to her chagrin. Once the camera starts rolling, she is demure and sophisticated; it's like something clicks inside of her and she's completely in character. Pete and I marveled at that from day one. I mean they're two completely separate people, and she's a great actress. The level that she brought to this movie—because I think a lot of people think of Get Smart and they know obviously that it's funny—but Anne was able to not get too deep into it, but bring this other side that was riveting. And I was amazed. She's a really fantastic actress. And beautiful too.

Anne: [To Steve] Wow, thank you. You don't have to buy me a Christmas present this year.

Opening across the Philippines on June 19, Get Smart is distributed by Warner Bros. Pictures, a Warner Entertainment Company.