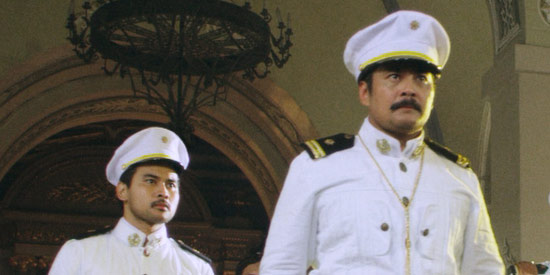 The historical biopic Heneral Luna opened its fourth week with a box-office gross of P172 million.

Atty. Joji Alonso, the film’s distributor, divulged how Heneral Luna fared in the box office via her Facebook post yesterday.

She posted [published as is], “HENERAL LUNA, the highest grossing historical film --- opens in 96 theaters today --- as it starts its 4th week!!!

“The film started slow at the box office. but because of your generous support, the film has broken norms and patterns and the usual dwindling statistics as each week passes.

She asked Filipinos to continue supporting the film to help it reach P200 million.

The earnings will be used for Artikulo Uno’s next hero biopic.

They are planning to produce a film on Gregorio del Pilar, who was portrayed by Paulo Avelino in Heneral Luna.

Atty. Joji pointed out that the producers need at least $2 million for the Oscar campaign of Heneral Luna.

“WE CONTINUE TO CALL ON ALL FILIPINOS, to help this film reach its break even point of 200M, so that the producers may have the resources to start its next film on another national hero.

“If you want to help some more, let us push this film further and help provide a kitty for its Oscar campaign, which needs $2M to make a decent run. â€ª#‎HeneralLunaCountdownTo200M â€ª#‎RoadtoOscars2016 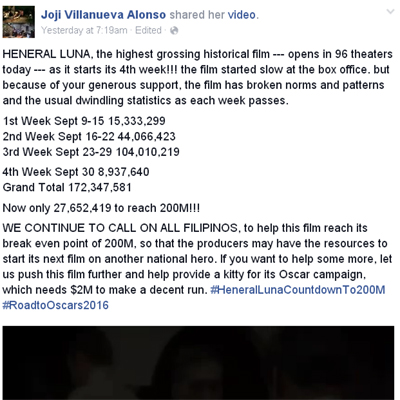 Heneral Luna tells the story of Filipino hero General Antonio Luna (played by John Arcilla) who was slain while serving as the leader of the Hukbong Sandatahan ng Pilipinas. When Luna was killed, American Governor-General Elwell Otis was quoted as saying, "You killed the only real general you had. Christ!"

Set during the Philippine/American War in the late 1800s, it showed the struggle of Filipinos for independence against the Americans.

It was recently announced that Heneral Luna is the Philippines’ submission to the Best Foreign Language category of the 2016 Academy Awards.

Read: What were the Filipino films that almost made it to Oscars 2016?

Directed by Jerrold Tarog, the biopic began its commercial run last September 9 and is still being shown in 112 cinemas nationwide.