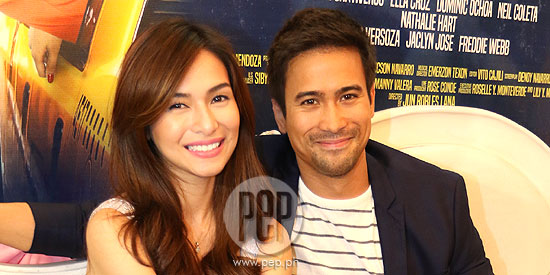 The Prenup lead stars Jennylyn Mercado and Sam Milby gave contrasting opinions on whether or not they would enter a prenuptial agreement in case they get married in the future.

Sam maintained that a prenup is out of the question when he settles down in the future.

“Personally, I don’t believe in prenup.

“It’s all or nothing when you become married. You share everything. You become one.

Hypothetically speaking, the Kapamilya actor explained that he would respect the girl if she would really insist on signing a prenup.

“I guess kahit papaano, if the girl really wants it, pagbigyan ko.

“Pero I will really try to find a way to win over the parents, the family, para may tiwala sila sa akin,” he explained.

Jennylyn, on the other hand, said that she won’t feel insecure or offended if a guy demands for a prenup before marrying her.

PEP.ph (Philippine Entertainment Portal) and other members of the media were able to interview Jennylyn and Sam at the presscon of The Prenup, held at 38 Valencia, Quezon City last Tuesday night.

Directed by Jun Lana, The Prenup tackles the story of Wendy and John, whose whirlwind romance begins in the United States.

But when they broke the news about their engagement back in the Philippines, John’s rich parents refused to give the young couple their blessing unless Wendy agrees to a prenuptial agreement.

Although this is their first movie together, Sam shared that he and Jennylyn instantly connected when they started shooting for The Prenup in the U.S. last July.

“She’s very outgoing and giving as an actor.

In the same vein, Jennylyn said that she appreciates Sam’s thoughtfulness as her leading man.

Produced by Regal Films, The Prenup is showing in theaters on October 14.

Aside from Jennylyn and Sam’s fresh tandem, the supporting cast of The Prenup will surely entertain moviegoers with their comic fights in the film.