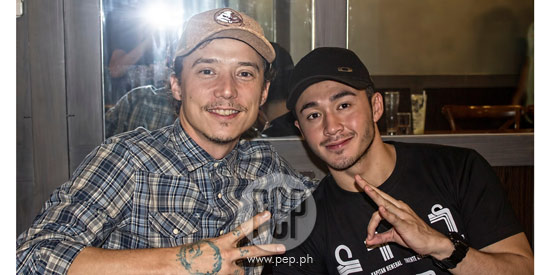 Epy Quizon (left) and Arron Villaflor were some of the Heneral Luna stars who graced the recent screening of the historical biopic.

“Since I was a kid, I was an Andres Bonifacio fan. After Bonifacio, I became an Apolinario Mabini fan. What I learnt is to go in-depth as to what a sublime paralytic really means,” admitted Epy Quizon.

The actor portrayed Apolinario Mabini in the film Heneral Luna, which is still being screened in cinemas nationwide.

Education is still a big problem in the Philippines. More than a week ago, Epy’s Facebook post about students not knowing the reason why Mabini cannot walk sparked a discussion about the Philippine’s educational system.

(Read: Epy Quizon dismayed by students' lack of awareness about Apolinario Mabini: “What have we been teaching these kids in our history classes?")


OSCARS RACE. Heneral Luna has been officially selected to represent the Philippines in the Best Foreign Language category of the 2016 Academy Awards.

“Of course, malayo pa tayo sa Oscars talaga because we have to be nominated still. We still have a long road ahead for us to say that we are an official entry for Oscars,” clarified Epy.

Eduardo Rocha, Jr., one of the film’s producers, was very “honored and happy” that this historical biopic was chosen for the 2016 Oscars race.

“My marketing team is analyzing that. We have contacts in the U.S. They are trying to check the odds. It is not about the film anymore, it’s about the country,” he added.

Rocha wrote the script of Heneral Luna together with Henry Hunt Francia, but the idea itself started 20 years ago.

He wrote it, “because the country needs a wake-up call. I wanted to write about a hero that’s closer to Shakespearean tragic hero. This was supposed to be for the country’s centennial celebration [in 1998].”

Prior to dabbling in films, Rocha was a theater actor and director in another country. He describes Jerrold Tarog, the director of Heneral Luna as “a genius.” Rocha thinks the reason why the film was chosen is “because of the phenomenon and the way people reacted to it.”

The film is one of the most expensive Filipino movies ever made. Initial reports indicated that the film cost P70 million to P80 million to make. However, Rocha clarified that it was actually produced for around P200 million. “The real breakeven point is P240 million pesos.”

The good thing is, the Philippines is not short of good Samaritans. Someone believed in the film enough went the extra mile so the less privileged were able to watch it for free and learn more about the country’s history.

He initially didn’t want to admit to the media that he was the one behind it since people might think it’s a political maneuver.

“When I was a councilor of Quezon City, marami tayong inintroduce na ordinances which benefitted the movie industry. From then on, nagkaroon na tayo ng connections sa industry. I really like helping out the movie industry. When I saw the film, I was amazed na ganito kaganda yung pelikula,” he recounted. “Napakahusay na pelikula. Nung nakita ko, sabi ko, dapat matulungan yung film. Yung Artikulo Uno [the producers of Heneral Luna], nagkausap kami.”

Inton hopes that this move will inspire “other people to sponsor films for those who can’t afford it” because he firmly believes in the educational value of the film.

Aside from Heneral Luna, Epy Quizon is featured in the Singaporean film Unlucky Plaza, which will have its theatrical release on January 2016. He is currently shooting for a Cinema One Originals 2015 entry by Raymond Red titled Mga Rebeldeng May Kaso.