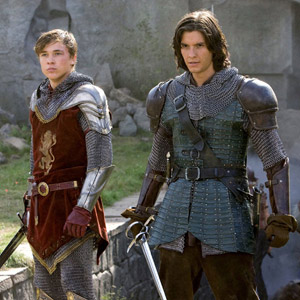 Peter Pevensie (William Mosley) and Prince Caspian(Ben Barnes) fight for Narnia in the movie The Chronicles of Narnia: Prince Caspian.


Disney's The Chronicles of Narnia: Prince Caspian is King of Philippine box-office. It is now at the No. 1 spot with a five-day (June 4-8) nationwide opening weekend of P44.97-million.

That debut figure breaks two records in the Disney books: it shatters the opening weekend of 2005's Chronicles of Narnia: The Lion, the Witch and the Wardrobe at P40.74-million, and claims the all-time, fourth biggest opening for a Disney film.

The enchanting characters of C.S. Lewis' timeless fantasy come to dazzling life again in The Chronicles of Narnia: Prince Caspian. This time, the Pevensie siblings—Peter, Susan, Edmund, and Lucy—are magically transported from World War II era England to Narnia through a tube station near London's Trafalgar Square. They then embark on a perilous new adventure and an even greater test of their faith and courage.

One year after the incredible events of The Lion, the Witch and the Wardrobe, the former Kings and Queens of Narnia find themselves back in that faraway realm, only to discover that more than 1,300 years have passed in Narnian time. During their absence, the Golden Age of Narnia has faded into legend. The land's magical talking animals and mythical creatures exist as little more than folk tales to the Telmarines, a race of humans led by the merciless Lord Miraz. The mighty lion Aslan has not been seen in a thousand years.

The four children have been summoned back to Narnia by Caspian, the young heir to the Telmarine throne, to combat his evil uncle Miraz.

Still playing across the Philippines, The Chronicles of Narnia: Prince Caspian is distributed by Walt Disney Studios Motion Pictures International through Columbia Pictures.