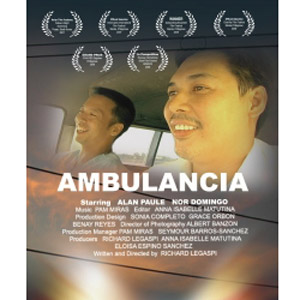 Richard Legaspi's Ambulancia, starring Nor Domingo (left) and Alan Paule (right), will be screened with six other short films as part of Katorse Shorts. It will be shown from June 11 to 17 at Robinsons Galleria IndieSine.


Below is the full line-up:

Gay lovers, Mario and Jose, experience the most joyful of mysteries.

Ambulancia tells of a painful twist in an ambulance driver's belief that a dying patient can be saved by running over stray animals on the streets.

Manyika is a tale of talking teddies, an impatient miss, and a misunderstood lover.


Puwang is a starkly real look into a family on the verge of falling apart in the face of impending death.

A young man's journey into the world of writing.

Lababo is the story of a young woman and a crazy woman who both fell in love with the same American soldier.

In competition, 8th International Panorama of Independent Film and Video in Greece


A young man who sits alone in a cafe every Sunday morning suddenly finds himself strangely falling in love with a girl he doesn't know.

Regular screening times would apply. Tickets are at P100 (equivalent to one program = 7 short films).