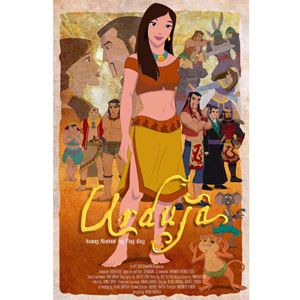 Four hundred Filipino animators produced over 120,000 drawings that will run in 1,922 scenes that comprise the movie Urduja. This animation film will open in theaters nationwide starting June 18, 2008.


Starting June 18, Filipinos will be able to watch the country's first full-length digital and traditional animation film created entirely by Pinoy animators. Done by over 400 Filipino animators who produced over 120,000 drawings that will run in 1,922 scenes equivalent to 8,771 feet of film, Urduja is a dream project that took more than 11 years of planning, production, and completion.


From the collective dedication and hard work of APT Entertainment, Seventoon, and Imaginary Friends, the love story of a Filipina princess and a Chinese pirate will be brought to life on the big screen. Viewers can look forward to a compelling story, beautiful music, and excellent 2D and 3D animation that is purely and proudly Philippine-made.

Urduja features the voices of a stellar lineup of dubbers led by Asia's Songbird Regine Velasquez as the voice of Urduja herself and Cesar Montano as her love interest, the Chinese pirate Limhang. Completing the powerhouse lineup are Eddie Garcia as the voice of Lakanpati, Johnny Delgado as Wang, Jay Manalo as Simakwel, Michael V as Kukut the rat, Allan K as Tarsir, Ruby Rodriguez as Mayumi, and Epi Quizon as Daisuke.

As the only daughter of Lakanpati, chieftain of the Tawilisi tribe of Central Luzon, Urduja was raised to be a warrior to help protect her people from their rival tribe, the Batyaws. However, Lakanpati's failing health has given rise to his concern from the tribe and the urgency of finding a man whom the Tawilisi warrior princess will marry and to whom Lakanpati will relinquish the tribe's leadership.

The man Lakanpati deems most eligible to become Urduja's husband and become the future Tawilisi chief is Simakwel, a Tawilisi warrior whom Urduja hates. Oblivious of Simakwel's ambitious and scheming ways, Lakanpati tries his best to convince Urduja to marry him. However, Urduja meets Limhang, who lands on the Tawilisi shore as he flees the wrath of the ruthlessly greedy Wang.


From this chance meeting blooms a beautiful romance between Urduja and Limhang, who will have to brave all odds to fight for their love for each other. Limhang is a foreigner who must prove his sincere intentions not only for Urduja but also for the Tawilisi foreigner while Urduja has to fulfill her obligations as a daughter to Lakanpati and a princess of her tribe.

The movie also features beautiful songs sung by the characters themselves in a number of memorable scenes that will captivate the audience. The movie's impressive songs are released in an original soundtrack. The carrier single is the movie's main theme song, "Babae Ako," sung by Regine Velasquez, with lyrics by Joey de Leon, music provided by Ogie Alcasid, and music arrangement by Mon Faustino and Noel Zarate.


Click HERE to view photos of the animated characters of Urduja.