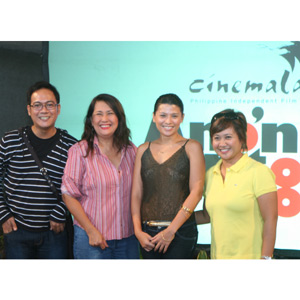 Chris Martinez (leftmost) direct mainstream stars (L-R) Tessie Tomas, Mylene Dizon, and Eugene Domingo in the Cinemalaya entry 100. This indie film will compete with nine other films in the fourth edition of Cinemalaya, which will take place from July 11-20, 2008.


Twenty new digital films will compete in the 2008 Cinemalaya Independent film Festival and Competition from July 11 to 20 at the Cultural Center of the Philippines. This year's theme has the tagline, "Anong Kwento Mo?" This ad campaign conveys the message that Filipinos everywhere have interesting stories to tell, especially Filipino independent filmmakers.


Also new this year in Cinemalaya is the tribute to Manuel Conde, a pioneer in filipino independent filmaking and a true auteur who produced, wrote, directed and acted in his films. Conde is credited with introducing Filipino films abroad, particularly at the Venice Film Festival. Six Conde films were shown during the Festival, namely: Genghis Khan (1950), Ibong Adarna (1955), Veganza (1958), Señorito (1953), Cruz Na Kawayan (1956), and El Robo (1957). The book The Cinema of Manuel Conde by Dr. Nicanor G. Tiongson will be launched on July 16 during the Cinemalaya Film Fest.

The full-length feature film category finalists were selected from a total of 194 entries submitted for the 2008 Cenimalaya. As finalists, they received an initial seed investment of P500,000 from Econolink Investment, Inc. The final winning entry will be given an additional grant of P200,000 plus the Cinemalaya Trophy during the awarding ceremony of July 20 at the Cultural Center of the Philippines.

The winner of the short film category will receive a P100,000 grant plus the Balanghai Cinemalaya trophy during the awarding ceremony on July 20 at the CCP.

Cinemalaya 2008 will be highlighted by the screening of world premieres, director's cut and the very best Filipino independent films on wide-ranging and controversial topics. Films from Cinemalaya 2005, 2006 and 2007 will also be shown. Close to a hundred films will be on an exhibition during the ten-day festival.

This year, Cinemalaya introduces the children's section, which aims to encourage the development and production of culturally relevant content for Filipino children. Nine films will be competing for the Rene O. Villanueva Prize, in honor of the late children's book author. Presented in cooperation with the National Council for Children's Television, the Cinemalaya Children's section will be dedicated to short narrative features made for viewing of children ages 3-13.

Films in Cinemalaya 2008 will be shown at all CCP venues, namely, the Main Theater, the Little Theater, Dream Theater, Tanghalang Huseng Batute, Silangan Hall, and the MKP Hall.