Will Smith plays a flawed superhero in "Hancock" 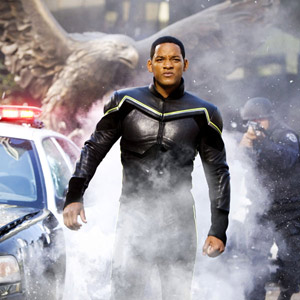 Will Smith portrays a sarcastic and misunderstood superhero named Hancock who causes much damage while doing good deeds in the city of Los Angeles.


Columbia Pictures presents Will Smith and Oscar-winner Charlize Theron in its new action comedy Hancock. Will portrays the tortured superhero who crash-lands in Los Angeles, causing chaos in the city.

Edgy, conflicted, sarcastic, and misunderstood, Hancock's well-intentioned heroics might get the job done and save countless lives, but always seems to leave jaw-dropping damage in their wake. The public has finally had enough—as grateful as they are to have their local hero, the good citizens of Los Angeles are wondering what they ever did to deserve this guy.

Hancock isn't the kind of man who cares what other people think-until the day that he saves the life of PR executive Ray Embrey (Jason Bateman). The sardonic superhero begins to realize that he may have a vulnerable side after all. Facing that will be Hancock's greatest challenge yet—and a task that may prove impossible as Ray's wife, Mary (Theron) insists that he is a lost cause.

Hancock's journey to the big screen wasn't always so obvious. A decade ago, when superheroes were battling colorful villains and not their own demons, the Hancock script posited that a crime fighter's personal struggles could be dramatically compelling. "It was always ahead of the curve," says producer Akiva Goldsman. "And now the curve finally caught up with it. What was so interesting about the screenplay was there never was a bad guy."

But the heart of Hancock still remains unusual popcorn season fare. As imagined by director Pete Berg (The Rundown, The Kingdom), screenwriters Vince Gilligan and Vy Vincent Ngo and producer Goldsman, Hancock starts the film as an amnesiac who has no recollection of what he once was capable of doing. The populace knows only what they see for themselves, and it's not pretty. In addition, the flawed superhero often drives under the influence of alcohol.

"He ends up causing millions of dollars of damage whenever he goes out, even if it's just to get a purse snatcher," Berg says.

With his former admirers having deserted him and even kids bad-mouthing his deeds, Hancock saves the life of public relations executive Ray Embry who wants to repay the debt by giving Hancock a hero-worship makeover.

But it is Embry's wife, Mary, who offers a more provocative twist on Hancock's future: She's not only stunning, but also has her own gifts. Initially dismissive of Hancock, Mary eventually is drawn to him. "Let's say they develop a very complicated and problematic attraction toward each other," Berg says, careful not to give away too much.

"It's a pretty unique blend of comedy and drama," he says, adding that it's "been a challenge" to strike the right balance between the two. "But that's why we were all attracted to the movie."