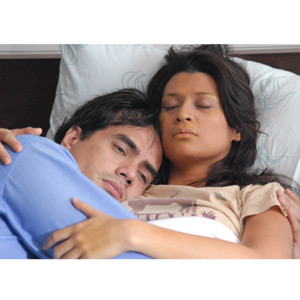 Mylene Dizon plays a cancer patient in the indie film 100, which is one of the ten full-length films included in this year's Cinemalaya Philippine Independent Film Festival. In this scene, she is joined by her leading man TJ Trinidad.


From July 11-20, the public will be able to see 10 full-length entries and 10 short films that will compete in the fourth edition of the Cinemalaya Philippine Independent Film Festival. This year's edition has the theme Anong Kwento Mo?, which conveys the message that Filipinos everywhere have interesting stories to tell, especially Filipino independent filmmakers.


Organizers earlier announced that two of the ten chosen finalists would not be taking part in Cinemalaya 2008. Emman dela Cruz's entry titled 1434456 is about a Punjabi widower named Ranjeet Singh, also fondly called Jimmy Paybsiks. The lead character, who lives in contemporary Manila, reflects the struggles of a migrant sector in the country-our Indian neighbors.


Antiparang Basag, supposed to be directed by Edith Asuncion, backed out due to the lack of a counterpart-financing scheme. This entry narrates how a woman helped four octogenarians fulfill their simple wishes in life.

In replacement of 1434456, Emilio "Jay" Abello was able to enter the Cinemalaya competition with his entry Namets (which is the Ilonggo word for yummy). This romantic comedy is a colorful rollicking celebration of food as well as love.


The other Cinemalaya entries for this year include 100 by Chris Martinez, Baby Angelo by Joel Ruiz and Abi Aquino, Brutus by Tara Illenberger, Concerto by Paul Morales, Huling Pasada by Paul Sta. Ana, Jay by Francis Pasion, My Fake American Accent by Onnah Valera and Ned Trespeces, and Ranchero by Michael Cardoz.


According to filmmaker Chris Martinez, his official entry to Cinemalaya is a "celebration of the senses and what life has to offer." His goal was to do a film about death in a young fresh way. By doing so he believes he celebrates life. 100 chronicles the last three months of a cancer-stricken woman (played by Mylene Dizon) who has a list of things to do before she dies. Her list of tasks, mostly dealing with closure and practical matters, covers the worldly and spiritual worlds as people close to her share her last days. The film examines the betrayal of the body, celebrates the senses and contemplates the end of life and how to live it. A light-hearted, briskly paced, youthful take on a classic subject, 100 stars today's most exciting performers such as Mylene Dizon, Eugene Domingo, Tessie Tomas, TJ Trinidad, Ryan Eigenmann, Simon Ibarra, and others. Under the creative supervision of Marlon Rivera, 100 is written and directed by Chris Martinez.

TV actress Ces Quesada gives the performance of her life in Baby Angelo. Her expressively sad eyes are able to convey emotions without the need for dialogue. When an aborted baby is found in the dumpster of a small apartment complex, the lives of its tenants are turned upside down, and they are forced to confront the ghosts of their own past. Though it is the investigation of this sad event that moves the film Baby Angelo forward, the story is really about the people that inhabit this story. Their lives are linked by a common emptiness, lost opportunities; lives cut abruptly by circumstance. And when a tragedy hangs over them, they are forced to examine their own lives, a series of inconsequential miseries that add up to absolutely nothing at all.

Award-winning director Ellen Ongkeko-Marfil describes her work as a musical journey. In this movie, a wounded violinist meets a child prodigy and helps him recover. Boses is the story of a musician who gains back his humanity by giving violin lessons to a child of the slums, who in turn, is able to get back his voice from a muted, abused and desensitized existence. This is a story of a wonderful friendship founded on the sublime beauty of music between a violin teacher and his student, a mute seven-year old abused child in a shelter. Ariel (played by Coke Bolipata) discovers the immense talent of Onyok hiding behind a veil of silence and pain caused by an unhappy and cruel father. In the developing relationship of teacher and student, both characters reveal more of themselves that otherwise may have remained unspoken. They discover each other's strengths and failures by way of expressing it through the violin.

Two Mangyan kids are hired by illegal loggers to smuggle wood from the mountains of Mindoro. Hiding the logs beneath a bamboo raft, the kids embark on a dangerous journey through whitewater and harsh terrain, risking life and limb to deliver the goods to the lowlands. They discover a world completely different from their own-run by the greed of men, a world governed by ideologies that bring about the armed conflict that plagues the Mindoro highlands, the home of their own people. She adds, "Apart from the serious subject it's also a coming of age film for the two kids. I'm also proud of the performances of Ronnie Lazaro and Yul Servo."

Theater director Paul Morales takes on the digital medium with Concerto. He pointed out, "This is a deeply personal story about my family and how we survived during the second World War. It shows the importance of music and was able to transcend borders."

Concerto is about a special piano concert is held in the forest outside Davao City during World War II. A displaced Filipino family, lead by former Military Commander Ricardo and his wife Julia, become acquainted with a group of Japanese officers. Their son Joselito, a Japanese speaker, becomes the conduit with the neighboring Japanese. Their daughters Niña, an aspiring concert pianist and the musically gifted Maria, who is able to play by ear, are alternately repulsed and intrigued by the officers.

Family values are questioned as the family treads the thin line between enmity and friendship with the occupying Japanese. Based on true stories from the director's own family history, Concerto celebrates a family whose reverence for life, expressed through their love of music and friendship, can survive even war, and shows how beauty and compassion does grow in even the harshest of conditions. Five actors from Japan were cast as officers. Direk Paul says, "I'm blessed with a talented cast that include Jay Aquitania, Meryll Soriano, Shamaine Buencamino, and Nonoy Froilan."

The title, according to director Paul Sta. Ana, refers to the taxi driver's shift and to a writer's most previous work. The story follows the creative process of Ruby, a prolific writer, abandoned wife and protective mother. She writes about Mario, a taxi driver who becomes a father figure to a street child in the hustle and bustle of the metropolis. As Ruby tries to resolve Mario and child's story, she seeks refuge in her own creative output: the line between reality and fiction is blurred, and her character's past is entangled with her own inevitable future. Two Ateneans share the directing duties for Huling Pasada: Paul Sta. Ana and Alvin Yapan.


Young director Francis Pasion summarizes his film as follows: "Baron Geisler's role as a gay TV producer personifies my commentary on Philippine media." Jay is the name of two protagonists in the film. Jay Santiago is a gay TV producer documenting the family of a gay hate crime victim who happens to be his namesake, Jay Mercado. In the process of producing for his TV program, Jay Santiago intrudes into the private grief of the other Jay's family and he is drawn to the secret life and love of his subject. Direk Francis issues a warning for his film, "Do not believe everything you see as truth." Aside from Baron, this film also stars Coco Martin as Edward.

Set in one of the high rises of the Makati, My Fake American Accent is a look into the lives of call center personnel. It's a slice-of-life workplace comedy following the lives of several Technical Support call center agents in the span of six months. They handle calls and provide inbound tech support for the American customers of an Internet company in the United States. Speaking with a fake American accent is a prerequisite for the job. This ensemble comedy is an inside look into the maddening, sleep-deprived, caffeine-fuelled lives of those who ply their trade in the call center industry.

Director Jay Abello describes his film Namets as a romantic comedy. He proudly proclaims, "It is the no angst film in Cinemalaya." He praises the acting skill of lead actress Angel Jacob who picked up the Ilonggo dialect in two months. Abello is ecstatic that they shot the dialogue almost entirely in Illonggo. Renowned director Peque Gallaga was also cast as a mafia boss. Namets (Yummy) follows the ongoing flirtation between Manuel and Lourdes, two native of the Negros province whose lives revolve around food. Along the way, we are treated to the full panorama of Ilonggo cuisine and the idiosyncrasies of appreciating it. Namets is a colorful rollicking celebration of food as well as love. Jay Abello explains, "If you notice, the love of food is very much part of our culture, not just in Negros but as Filipinos in general."

The unpredictability of life in jail is the subject of Ranchero. Director Michael Cardoz likes characters who aren't what they seem. "Merong kontrabida na nagiging bida."

Ranchero unfolds in a small provincial jail in Rizal. It's about Ricardo whose last day in jail is today. He and his close friend Miyong work in the jail's kitchen. The two spent the whole morning talking about Ricardo's plans when he gets out of jail. After lunch, one of the kitchen knives went missing and this was brought to the attention of jail officials. Not only will this event affect food preparation in the jail's kitchen but also the lives of both of them.