Will Smith uses a harness to fly in "Hancock" 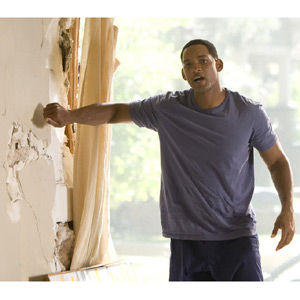 Hancock (Will Smith) tries to do good deeds in Los Angeles but ends up causing more damage to the city. This action adventure film from Columbia Pictures will open in cinemas nationwide starting July 3 (Thursday).


Every superhero has a weakness. Hancock (Will Smith) just happens to be flush with them.

In the film, Hancock hates his job, loves his booze, and would be pulled over for flying under the influence—if anyone could catch him after he has plowed through a building or a traffic sign.


"Hancock does as much damage as good," director Peter Berg says from the set on Hollywood Boulevard, where he and crews have turned over trucks, set fires, and scattered plastic rubble to turn Los Angeles into a city of ruin. "There are a lot of fun things to making a movie, but the best is creating an entire world that feels real."

Part of getting real: using a harness and wires, not a green screen, to make Will's superhero character fly. The actor was suspended 200 feet above the ground and propelled at 50 mph, and he's more than fine with it. "The computer effects look great," Will Smith says after being unhooked from his ride down the famed street. "But it's more fun to get your hands dirty."

Peter Berg made his writing and directing debut with TV's acclaimed Chicago Hope, then wrote and directed the feature film Very Bad Things (1998), starring Cameron Diaz.. His next feature film, the smash hit The Rundown (2003), gave Berg the opportunity to direct someone else's screenplay. He then directed the sports drama Friday Night Lights starring Billy Bob Thornton, which was such a big hit that it spawned a TV series of the same name, for which Berg directed the pilot. More recently, he helmed the Iraq War thriller The Kingdom (2007) for the big screen.

Berg's acting career is also going strong, having played a recurring role on ABC's hit series Alias and roles in films such as Collateral (2004) and Smokin' Aces (2007).

Opening across the Philippines on Thursday, July 3, Hancock is distributed by Columbia Pictures, local office of Sony Pictures Releasing International.