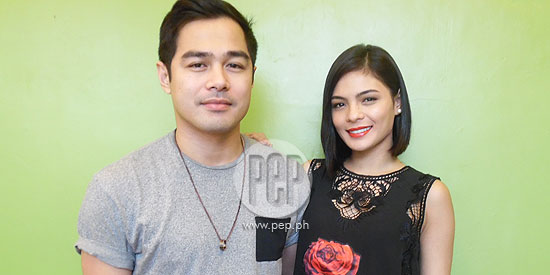 “It offers entertainment, but it also offers people something that they can learn about. Entertainment is fine but it's nice also while you're being entertained, natututo ka,” says Lovi Poe about hit historical film Heneral Luna.

Benjamin Alves and Lovi Poe commend the impact that Heneral Luna had on moviegoers.

The stars of the GMA-7 show Beautiful Strangers admitted that they felt very angry after watching the top-grossing historical Filipino movie.

The film about General Antonio Luna has been chosen as the Philippine entry for the 2016 Oscars race.

In an interview with PEP.ph prior to their Kapuso Masskara Festival show in Bacolod, Lovi described Heneral Luna as an eye-opener for Filipinos.

“I think, for me, it's really important because before we move on to the future, we have to be aware of our past, 'yong history natin.

“Watching Heneral Luna will make you feel like nothing has changed.

“I was so angry paglabas ko ng theater. I was like, wala pa ring nagbabago sa Pilipinas.

“I kept ranting and ranting.

“Parang these things should be like an eye-opener. Ito yung mga dapat panoorin ng mga tao.

“Parang, yes, it offers entertainment, but it also offers people something that they can learn about.

“Entertainment is fine but it's nice also while you're being entertained, natututo ka.”

Lovi hopes her upcoming biopic, Lakambini, will have the same effect on moviegoers. She will play the role of a young Gregoria de Jesus in the said period film.

Ben, who played Manuel Quezon in Heneral Luna, said, “I think it's also good that they tried again to spark a conversation with the film.

“Yung part ng entertainment is you wanna know more about our history and how that compares to the things that are going on now.

“Parang in the times now that we have, parang we always want something new, parang bago palagi ang gusto mo.”

Ben also believes that the way Heneral Luna was presented had a different effect on viewers.

“Hopefully, that propels us to change things.”

EFFECT ON VOTERS. The Kapuso actors hope that the effect of Heneral Luna on people who have seen it will translate to the national elections in 2016.

“That really depends on the people now.

Ben agreed, “We have to start somewhere. Sana di masayang.

“Then, we have to stick with it. We're gonna have to complain about it again.

“People will have to do it again. If we get a mistake there.”

He further stressed, “You have no right to complain if you're not involved in the process, 'yon lang naman 'yon. But if you vote, you're more than welcome.”

Since Lovi is very vocal about supporting the presidential bid of her half sister, Senator Grace Poe-Llamanzares, PEP asked Benjamin if he's also open to endorse politicians in election 2016.

He quickly replied, “Of course, I just wanna make sure it's someone I really believe in.

“There's gonna be time to do that especially when this show is done.

“You just have to make an educated choice, e, even if you're not being paid.”

Benjamin also clarified that talent fee will not be part of the deal if he endorses a politician.

“You've got to support someone instead of the monetary reward or whatever you're gonna get. Kailangan yung iboboto mo talaga hindi dahil sa monetary reason,” he ended.