"My Monster Mom" opens on July 2 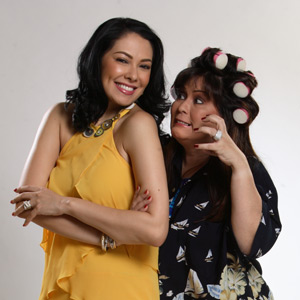 Ruffa Gutierrez and her mother Annabelle Rama appear together in the comedy film My Monster Mom, which opens in theaters nationwide starting July 2.

After more than 35 years, Annabelle Rama returns to the silver screen for her comeback movie produced by GMA Films and Regal Entertainment. In My Monster Mom, the feisty talent manager stars with her unica hija Ruffa Gutierrez in this heartwarming yet funny tale about a mother who becomes reunited with her daughter after many years of absence.

During the first press conference of My Monster Mom, Ruffa told the press, "It is such a joy to work with my mom for the first time. There are so many stories to tell all of you. I'd like to thank Mother Lily [Monteverde] and GMA Films for giving me the chance to work with my monster mom and for allowing me to work with Direk Joey Reyes for the second time. Yung first time po namin magkasama, Regal Shocker days pa!"


SYNOPSIS. My Monster Mom focuses on Annabelle Rama as the "monster" to her three beautiful and charming kids. She plays the role of Esme Fajardo who becomes pregnant at the young age of 16 years old. This prompted Esme to entrust her eldest child (Ruffa Gutierrez) to her brother and sister-in-law who happens to migrate in the United States. Despite her instability in life, Esme promises that she will be reunited with her daughter.

However, the distance proved to be a hindrance since Esme was unable to communicate regularly with her brother and her only child. Abby grew up without knowing her biological mother. After getting into a series of failed relationships, Esme bears two other children Pipo (Mart Escudero) and Boboy (JC de Vera), both of whom have different fathers.


A shocking blow came to Esme's life when she learned that her brother died in the United States. Abby then learns about her real identity and decides to come to the Philippines to meet Esme.

Continue reading below ↓
Both Esme and Abby were unprepared for their sudden reunion. They both lived in two different worlds and could not understand each other's culture and way of life. Abby the balikbayan could not adapt to the Pinoy culture since she has been living as a renowned fashion stylist in New York for all her life. Esme, on the other hand, lives in Kamuning and is a street-smart person. Her friends are all equally formidable, namely a retired Japayuki who recruits Filipinas to be sent abroad as entertainers (played by Eugene Domingo) and an ageing Visayan queen who sells jewelry (played by Khryss Adalia).


As Esme and Abby begin to accept their similarities and differences, they realize that despite their opposite lives, they do share the same genetic heritage. This co-production of GMA Films and Regal Entertainment is a must-see amusing movie for everyone who wants to get a good laugh while watching this and thinking of their own "monster" moms.