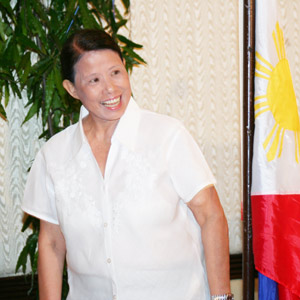 
"I will always be a Filipino film producer until I die," proudly proclaimed Mother Lily Monteverde in the midst of difficulties faced by theater owners, producers, and the whole movie industry. The Regal Entertainment founder and matriarch addressed the participants at the Anti-Flicker Piracy seminar held at Club Filipino in San Juan last June 17. This seminar was organized by the Motion Picture Anti-Film Piracy Council.

Mother Lily recalled her humble beginnings, specifically the first film she imported from the United States. "In 1961, I had a little money, my husband and I went to New York. We had to scrimp on meals. I pretended to be full and ate whatever my husband left over. Then we were able to save $500 to buy what they call a re-issue print."


When she returned to the Philippines, none of the theater owners wanted to show her first purchased film because it was dated. Eventually, a theater in Cebu gave her film a break and allowed her to screen it. Mother Lily acknowledged the father of Valeriano "Bobit" Avila as the person who gave her the break. It was their theater that allowed Mother Lily to show her first movie and eventually earn P500,000. Bobit is currently president of the Cebu Metro Theater Owners Association.

Bobit Avila recalled the title of that first film, All Mine to Give, which wasabout a mother forced to give away her children for them to survive.

Over four decades later, Mother Lily has produced countless local films and is highly regarded as one of the pillars of the movie industry.

"Even when Regal Films was at its height, we still saved our expenses in order to help the industry. Today, I am able to contribute as a consultant to GMA Films and help the industry in that manner. We must fight hand in hand to battle piracy," said Mother Lily.

The local film industry is reeling from the proliferation of fake DVD titles. "We used to have 5 cinemas, now we only have three," said Mr. Avila. He also explained that in the United States, the protection of Intellectual Property Rights has now fallen under the jurisdiction of Homeland Security. An officer shared with him that even in Guam, Filipino- produced movies are also being pirated.

Ric Camaligan, president of the Motion Picture Anti-Piracy Council also announced during the seminar that P10,000 is being offered as an incentive for people to report those whom they see recording movies in cinemas:

"If one reports a person using a flicker/camcorder you can get P10,000 after the blotter report. And after the hearing with the fiscal, you get an additional P10,000. So anyone can get a total P20,000 reward for reporting the crime of recording a movie in the cinema. A hundred cases were already reported and solved in this manner."

Mr. Camaligan, who is also the vice president for Theater Operations of SM Malls, claimed that video and theater sales have gone down 30 percent.

"And of these estimated profits only 30 percent are legitimate, 70 percent are pirated. The government is losing over a billion pesos in lost revenue from piracy. More cinemas will be closing. Filipinos one day will watch their movies in Plaza Miranda. We are gathered to strengthen our system. We are fighting back."