It’s too easy to focus on the 10-minute sex scene of Anino Sa Likod ng Buwan showing Luis Alandy and LJ Reyes stripped down and practically completely naked. But seen in the context of the movie, it is a pivotal point that changes the viewers’ perspectives and is among the many twists and turns in the narrative.

The movie is set during the early 1990s, in Marag Valley, that stretches from Apayao to Cagayan.

During this time, the area located at the northern Philippines was suspected to be a hotbed of communist insurgents and for about three years, there were active military operations in the area.

As a consequence and as often happens in the middle of war, the mass of residents become the ultimate victims of periodic skirmishes between government and left-wing forces.

The almost two-hour story happens in just one setting—an isolated shack—on the night of a lunar eclipse.

Even with a lean cast composed of only three actors, there is no lack of tension and dread on a night where secrets and lies unfold with an explosive ending. 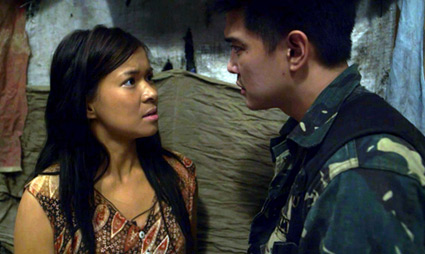 
LJ Reyes stars as Emma who is married to Anthony Falcon’s character, Nardo.

They live in a small hut—in what could be any generic hut in the area—refugees in their own home province, unable to leave and also unable to roam freely because of the dangers lurking around them.

Luis Alandy plays Joel, a soldier who befriends the young couple. It is an unconventional friendship but their dynamics as the film opens feels like they are lifelong friends, playing a card game and making small talk in a makeshift table to pass the time.

The movie happens within and around the four walls of the couple’s hut, which feels like it exists in a separate dimension as all other action happens beyond their fence, in the darkness.

Despite the seeming typical evening, as the friends hang out, there are many external factors that weigh above them: an impending eclipse that folk knowledge considers to be an ominous omen and the continuing violent, unpredictable clashes between the military forces and the rebels—with the villagers eventually caught in the crossfire. They are hostages in the power struggle.

The shifts of emotions and the themes in the movie cause the feeling of a rollercoaster ride: from jovial to suspicious to menacing; from the boys comparing penis sizes to mythical figures to the true wages and victims of war.

Written and directed by Jun Robles Lana, the script is dialogue-heavy, but there are little crumbs that set up some things that all make sense in the end, at the final concluding scene.

Though there are one or two details in the script that seem inconsistent.

LJ Reyes is a revelation! She, who is best known for her bedimpled smile, does well to suppress it even in the scant joyful scenes. At first, it is difficult to see her as the actress as she is bare-faced and almost lifeless.

However, as the film progresses, she displays a wide range and depth of emotions: even extreme lust and extreme sadness.

Anthony Falcon’s portrayal and natural that we believe he is actually just an everyman or “regular Juan.” But it is also a very strategic portrayal because when revelation after revelation is made, another layer of the actor’s talent is revealed.

Luis Alandy seems like a flat character at first, a good soldier and as a possible third member in a love triangle. The twist in his character’s demeanor in the last quarter of the movie is chilling, however. Not only does the ensemble all look good onscreen, they are also extremely believable.

At the end of the film, though, the audience cannot be blamed for being exhausted after the many shifts in emotions and twists in the tale.

There are many innovations made by director Jun Robles Lana, apart from shooting in a limited setting in a studio made to look like a natural setting. It is by no means the first time that a movie has used a studio as a setting to recreate natural elements and, more importantly, to create a controlled environment.

Director Adolf Alix used a similar technique in Death March. Director Lana’s theater roots show in his use of sets as well as excellently-directed actors, but add to that the factor of camerawork in one is intended to be a continuous shot.

German playwright Bertolt Brecht is an influence that can be cited for the director’s use of a soundstage/controlled environment, eschewing a location shoot. Brecht’s ideas advocate that the play should be recognized as a mere representation of reality, and more obviously, the concept of theater or in this case, the movie, as a way to address political ideas and lead the audience to self-reflection.

One precursor of the continuous camera action is Alfred Hitchcock’s thriller Rope, that also creates the feeling of claustrophobia as much of the action happens in a single, contained space, and tensions are felt to escalate between the various players.

The camera work, most probably accomplished via a steadycam, goes around and follows one character and then the other; zooms in on the face of one or zooms out to reveal the tableau.

The soundtrack consists of sound effects of crickets, suspicious silences, gunshots, and some incidental ambient sounds.

It is interesting to note the parallelisms between the friendly Pusoy Dos at the start of the movie and the tension-filled card game towards the finale.

One thing is guaranteed though: you won't look at Pusoy Dos the same way ever again

Anino Sa Likod ng Buwan won four honors, including Best Director (for Jun Robles Lana) and Best Actress (for LJ Reyes), at the 13th Pacific Meridian Film Festival in Russia. In the same film fest, the movie with the international title Shadow Behind the Moon was also named Best Asian Film by Netpac (Network for the Promotion of Asian Cinema) and earned the International Critics Prize from Fipresci (International Federation of Film Critics).

It is part of the roster of the 2015 QCinema Film Festival that will have a special screening at Robinsons Galleria this Saturday (October 31) at 9 pm.