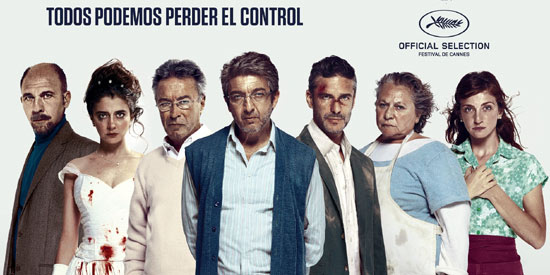 The 2015 Argentine Film Festival takes place at Shangri-La Plaza from October 29-31. The lineup includes five films representing the best of contemporary Argentine cinema, including the short film The Queen, the experimental-adventure film The Gold Bug, the animation Underdogs, the drama Wild Tales (in photo), and the satire The Corporation.

The inaugural Argentine Film Festival in Manila offers a mix of dramatic and relevant films from October 29 to 31 at the Shangri-La Cineplex.

Argentine Ambassador Roberto Bosch emphasized the diversity of the five films, which he hopes will give Filipinos a taste of Argentine culture.

“Our aim is for Filipinos to know more about our country, and also Argentine directors and producers to realize that the Philippines is also interested,” the ambassador said. “We tried to show a variety of films to show that there is something for everyone.”

Heralding the festival is Relatos Salvajes (Wild Tales), the Argentine entry to the 2015 Academy Awards in the Best Foreign Language category. It was also nominated for the Palme d’Or at Cannes 2014. The film underscores the effects of inequality and injustice as it tells the story of a lover's betrayal. Wild Tales is an anthology film made up of six standalone short dark comedies and dramas, all weaved together by the theme of vengeance and absurdity.

Drama and suspense shake up the idyllic life of a successful businessman in La Corporacion (The Corporation). This urban thriller sheds light on the facades of consumerist and patriarchal society as it follows the marriage of Felipe and Luz.ï¿½ They both seem to be leading a happy marriage until it is revealed that their happy life together is a sham.ï¿½ Felipe bought it as a service from The Corporation, a company that provides its clients their ideal partner and an idyllic life—but for a high price.

The short film La Reina, which tells the story of a young girl who prepares to become the queen of the carnival, leaves a strong impression about the lure of pageant glitz and glamour. The Queen delves into the world of child beauty pageants, illustrating the ironies, illusions, and contradictions its young participants are manipulated into believing and emulating.ï¿½ The eleven-year-old Memi is one of these young girls, and her journey in this deceptive universe is an unhappy one. The film won awards in nearly fifty film festivals around the world, including the Melbourne Film Festival, Documenta Madrid, BAFCI, and the Los Angeles Film Festival.

Argentine cinema also takes inspiration from literature, such as the case of El Escarabajo de Oro (The Gold Bug), which is based loosely on the story of Edgar Allan Poe. In this film, a group of people embark on a trip to search for a mysterious treasure, guided by a cryptogram drawn exactly from Poe's book.

The festival also offers an animated adventure film for children with Metegol (Underdog), centered around a shy, smart boy as he and his foosball team try to get back and work together in time to face their rivals in the field. It is an underdog match, prompting him to seek the help from an unexpected source.ï¿½ The film broke the record for highest grossing opening Argentine film at the box office, and is the most expensive Argentine and Latin American animated feature of all time.

All films will be screened for free at the Shangri-La Cineplex.