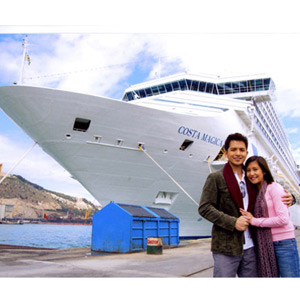 Dennis Trillo and Jolina Magdangal pose happily before boarding the Costa Magica, the luxury cruise ship that is the set location of GMA Films's newest romantic dramedy I.T.A.L.Y. (I Trust and Love You). This sidesplitting comedy opens in cinemas nationwide on August 6.


For two weeks, GMA-7 stars embarked on a Northern Italy cruise aboard the luxury ship Costa Magica to show the lighter side of working overseas. GMA Films' newest comedy titled I.T.A.L.Y. (I Trust and Love You) will take viewers on a romantic journey that takes place in three continents, five countries, and 13 cities.


This motion picture will have viewers sailing through a romantic odyssey tackling life, love, and destiny. Starting August 6, this GMA Films movie will have its regular run in movie houses nationwide.


SYNOPSIS. Written by Senedy Que and directed by Mark Reyes (the nephew of Direk Joey Reyes), I.T.A.L.Y. tells the story of six people with various personalities, ambitions, and struggles. In a span of their magical voyage for seven days, their lives will crisscross amid unexpected possibilities.


Jolina Magdangal portrays the role of Des Pinlac, a hopeless romantic who works as a chambermaid at the ship. Finding the right man is her fervent wish but things don't go too well for her. Rufa Mae Quinto is Stella Sembrano, the cruise's lounge singer who patiently waits for her perfect man. She has still not given up on love even though she was abandoned by her father and her past boyfriends.


Dennis Trillo plays the role of Paolo Guzman, the hunk who is the object of affection of three women: Des, Stella, and Sophia, his Italian girlfriend played by Andrea de Lugo. Paolo joined this cruise in order to discover the truth about his previous girlfriend.


Eugene Domingo is Lovely Mercado, a senior housekeeper who believes it isnever too late to find true and everlasting love. With two failed attempts to tie the knot, Lovely holds the key in connecting Paolo with the woman in his past. Rhian Ramos portrays Phoebe Villaroso, a rebellious brat who does what she wants. She falls in love with the plain-looking cabin crew member Nathan Reyes (Mark Herras). Orphaned at a young age, Nathan has to work for his family aboard the cruise ship. He also becomes attracted to Phoebe but his social class becomes a hindrance to their love affair.


MODERN-DAY HEROES. In the June 19 press conference of I.T.A.L.Y., cast members shared their thoughts about our fellow kababayans who work abroad.


The crew members of the Costa Magica became so attached to the cast of I.T.A.L.Y. that they cried when the Kapuso stars ended their taping.


Unfortunately, Rufa Mae Quinto was not present at the press conference since she was abroad at the time. The majestic cruise ship Costa Magica, owned by an Italian company, was their home during their two-week shooting schedule. Direk Mark Reyes describes this ship as big as SM Megamall.


Since the cast members shot this movie while they were aboard the cruise ship, it was inevitable that they would encounter seasickness. Direk Reyes narrated how they would cope with the instability of the ship.


"Si Dennis nahirapan. Si Jolina, may motion sickness. Lahat sila tinamaan except Mark Herras, Rhian Ramos, and me. We hit turbulent waters, umaandar ang mga mesa. The best [therapy] there is to go out and look out to the sea, to the horizon. Dun maayos ang equilibrium ng tenga mo, e."


Moviegoers will be enchanted by the movie I.T.A.L.Y. (I Trust and Love You) especially since it was shot in romantic places such as Genoa, Milan, Savona, Napoli, Florence, Pisa, Rome, (Italy); Marseilles (France); Barcelona, Palma de Mallorca, (Spain); and Tunisia, Africa.


Click HERE to view photos of I.T.A.L.Y. (I Trust and Love You) cast members.