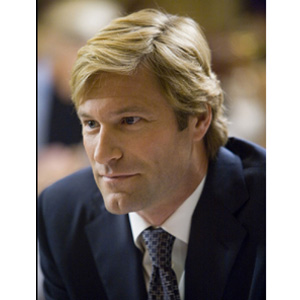 
Aaron Eckhart (No Reservations, The Core) stars as District Attorney Harvey Dent/Two-Face in Warner Bros.' new action adventure The Dark Knight. This is the follow-up to the action hit Batman Begins. The film reunites director Christopher Nolan and star Christian Bale, who reprises the role of Batman/Bruce Wayne.

In The Dark Knight, Batman sets out to destroy organized crime in Gotham for good, with the help of Lieutenant Jim Gordon (Gary Oldman) and DA Harvey Dent. The triumvirate proves to be effective, but they soon find themselves prey to a rising criminal mastermind known as the Joker (the late Heath Ledger), who thrusts Gotham into anarchy and forces the Dark Knight ever closer to crossing the fine line between hero and vigilante.

Eckhart sat down with journalists during a set-visit last August 2007, prior to Ledger's passing. The following are excerpts from that interview.

Question: Did you go back to the performances of previous Harvey Dents—Billy Dee Williams and Tommy Lee Jones?

Aaron: I did not. The last time I saw those, I was in...whatever I wore to school (Laughs). The Dark Knight is quite a great script and Harvey's quite a great character. I think this is going to be a breakout Batman. It's going to surprise a lot of people. Actors are playing characters differently from their predecessors, so it really has no connection with the past.

Q: How did you handle the part of Two-Face?

Aaron: Well, Two-Face, as it's well known in the comic books, is an angry guy. (Laughs). I just dialed into that, something that would happen to you in that way. He's lost everything that ever meant anything to him. Which is love. And he can't get it back, and he's done it because maybe people haven't been doing their jobs. And I think that's a lot of where his anger comes from. He thinks it could've been avoided and so I think he is hurting, he's got a lot of anger and resentment, all those very human emotions.

Q: Do you have to go back and forth a lot in the film between the two characters?

Aaron: They usually give me a lunch break, but yeah. (Laughs) The filming schedule really cannot be based on anybody's preference, so one day you could be Harvey Dent, DA and another you could be Two-Face for sure. I think that talking about preparation stuff—and having done movies for a while—you get used to it, it's not a problem, I mean...to illustrate it, I could be walking down the street very happy, and then something could happen and you could get enraged in a nanosecond, so I think we have the ability to do that.

Q: When you read the script, what were you looking forward to being able to do as this character?

Aaron: When I read this script, I was looking for a character, hoping for a character. I had met with [director] Chris [Nolan], and he then allowed me to read the script. And it was my great desire that I would read this script and be happy. As opposed to read the script and have to con myself into liking the part. I can't say enough how great everybody's role in this movie is. Down to Gary and Morgan [Freeman] and me, and Heath [Ledger] has an amazing role. Everybody gets to act in the movie, everybody has an arc, as they say, or has something to do in the movie. And Chris tells as great story, so I was thrilled when I read it, and I had to ask again if they were gonna offer it to me! (Laughs). Because when I read it, I wasn't sure I had the part! But I'm glad I'm a part of it, really, really happy. And to have worked with people that I admire so much. I get to work a lot with Gary Oldman in the movie.

Q: Has Two-Face been aesthetically re-invented in the movie?

Aaron: Uh... I don't know... He's pretty straightforward. The coin's there. One thing that I personally believe in is you ought to give the people what they want. And that's a character that they know, and they're used to. Now, you can endure different degrees of how you do that, and passion, but I feel like, if you go to a concert, you want the guys to play the songs that you know. You don't want them to play songs in a different way. That's not to say that they're not going to be exciting and enthused with new energy or passion or a different way of doing things, but I think the fundamentals are there.

Q: Do you act differently when you are hiding under a mask?

Aaron: I think that as actors will tell you, everything helps. If you have an impediment or if you have something on your face, or you're carrying a load, or you gain weight for a part, or whatever, you can't help but act differently. So yes it does. It just puts you immediately into that mindset. I'm sure that when Heath puts on his makeup that he goes to a place... It's also in the preparation of putting on that makeup and getting... when you're looking in the mirror in makeup and it takes a long time to put it on, and all this... that you use that time to channel that energy, and that's where a lot of that (clicks fingers) flipping on the anger, boom, boom, boom... Once you get into your clothes and your character...

Q: Is your make-up scary?

Aaron: That question I cannot answer, surprisingly. I think it's going to be a surprise about the character, and that's why you don't see any Two-Face pictures around. But we did see a little bit cut together, and I think you guys are going to be really happy. I was!

Opening soon across the Philippines, The Dark Knight will be distributed worldwide in theatres and IMAX by Warner Bros. Pictures, a Warner Bros. Entertainment Company.