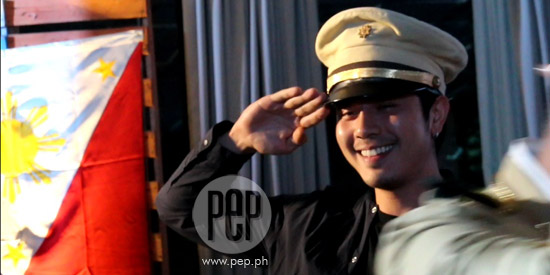 Artikulo Uno originally planned to produce a trilogy depicting the lives of Antonio Luna, Gregorio del Pilar, and Manuel L. Quezon. After the overwhelming success of Heneral Luna, Paulo Avelino (in photo) is tapped to bring life to the young general known as Goyong.

Producers of the blockbuster historical film Heneral Luna happily announced last October 28 that they are coming up with a biopic of another general of the Philippine revolution: Gregorio del Pilar.

“General del Pilar is in development,” reveals E.A. Rocha, scriptwriter and one of the producers of Heneral Luna.

“We are thanking all the fans who embraced Luna and owned the film.

“We are keeping our promise. Del Pilar is coming and, of course, it'll be starring Paulo Avelino.

“There's no title yet. We'll begin on the script soon, but it's not gonna be a quickie because we'll spend as much time as [we did in] Heneral Luna."

The movie's thanksgiving party held at the Sampaguita Gardens was held to coincide with Antonio Luna’s 149th birthday.

Overall, it took 18 years for Heneral Luna to be produced since E.A. Rocha and the late Henry Francia co-wrote a script about the hotheaded general in time for the celebration of the centennial of Philippine independence.

Director Jerrold Tarog learned about the script (which was originally written in English) and he asked permission to rewrite it.

As for the movie about Del Pilar, Rocha said, “We hope to release it in two to three years, so we will take our time to do our research to give it the same feel and the same look as Luna.”

PAULO AVELINO AS GOYONG. Paulo, who appeared as Gregorio del Pilar in Heneral Luna, will topbill the movie on one of the youngest generals of the Philippine revolution.

What is his reaction to this announcement?

The actor added that the role is a big challenge for him.

Paulo wants to elicit the same kind of response Heneral Luna got from moviegoers.

Paulo believes the Del Pilar biopic will be as good as Heneral Luna.

“It's the same director [Jerrold Tarog], same production. So it's gonna be as great as Heneral Luna,” Paulo explained.


ANTI-HERO TRILOGY. Director Jerrold Tarog told PEP.ph why he pitched to depict the lives of these three heroes:

Have they started work on the movie about the young general who was killed in 1899 at the Battle of Tirad Pass?

"Baka umakyat ako ng Tirad Pass [where Goyong died at the age of 24].

Who else will be part of Goyong?

In the bonus scene shown after the Heneral Luna movie, viewers were able to see Paulo's Gregorio del Pilar issuing orders to the character of Ronnie who was promoted for showing bravery and his sharpshooting skills.

According to Direk Jerrold, Mon Confiado will still remain as President Emilio Aguinaldo in the biopics of Gregorio del Pilar and Manuel L. Quezon.