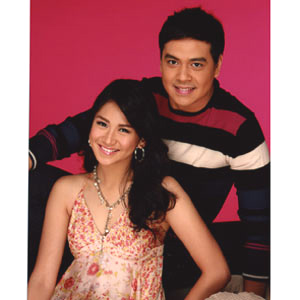 Sarah Geronimo and John Lloyd Cruz star in A Very Special Love, a Star Cinema movie that will open in theaters nationwide on July 30, 2008.


Star Cinema offers a new tandem for viewers to watch for: Sarah Geronimo and John Lloyd Cruz have been chosen to topbill its newest romantic movie titled A Very Special Love. Watch the new love team in this movie directed by Cathy Garcia-Molina.


During the press conference of the movie last Tuesday, June 24, at Burgoo restaurant, Tomas Morato, Sarah and John Lloyd faced the press to answer questions regarding their first movie together.


John Lloyd recalls the time when they worked together in an episode of Maalala Mo Kaya, which was recently shown again on ABS-CBN. "Noon po kasing ginawa namin ang MMK, isang tanong-isang sagot po 'yan. Isang tanong ako at isang sagot siya and then, that's it!"

When Direk Cathy Garcia-Molina was asked to comment about the chemistry between John Lloyd and Sarah, she observes, "Meron nang inherent chemistry yung dalawa sa MMK. We just started from there. Sa kanila na nanggaling...there is really something between the two. When they look at each other, that's just it. Hindi ko na kailangang mag-direk!"


SYNOPSIS. A Very Special Love is about two young people with totally different backgrounds but they discover that love truly knows no barriers.

Sarah plays Laida, the breadwinner of her family. John Lloyd is Miggy of the Montenegro clan, the owner of several businesses including a publishing firm that he manages.

Laida is hired as an editorial assistant of one of the magazines named Bachelor, which Miggy publishes. The boss decides to make Laida his own personal assistant and even forces to pretend to be his girlfriend during an event. Pretty soon, Laida's dedication to her job and the special attention that she was receiving from the big boss caught the attention of the other employees. She became the butt of jokes and gossip started being spread about her in the office. Is it possible for someone like her to fall in love with a guy who is a snob and a braggart?