"Prom Night" remake to open soon in the Philippines 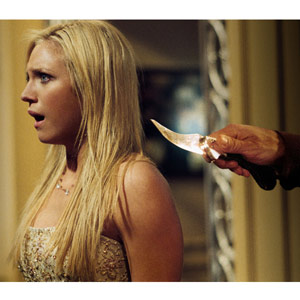 Brittany Snow reprises the role of Jamie Lee Curtis in the remake of the horror flick Prom Night. This movie from Columbia Pictures will soon open in the Philippines.


When producers Marc Forby and Neal Moritz set out to make a film inspired by the 1980 thriller Prom Night, their intent was to completely re-imagine the picture for a new, more sophisticated audience. The result is Columbia Pictures' re-invigorated suspenseful film, Prom Night starring Brittany Snow.

In the film, the night every high school girl dreams of turns from magic to mayhem for Donna (Snow) when Fenton, the obsessed psychopath who killed her entire family escapes from prison and comes to claim her.

The original Prom Night, which starred Jamie Lee Curtis at the height of her "scream queen" notoriety, is one of the classic slasher films of that era, but Forby and Moritz envisioned a script in which the emphasis would be on suspense, with the gore toned down significantly.

"In the post-Saw world, we've gone as far as we can with onscreen violence," says Forby. "We went back to the classic, old-school thriller where the scares are really coming more out of, ‘Where is the villain right now? Is he right there? Is he behind her?'" Saw is the 2004 horror movie that is known for its disturbing plot about two people trying to figure out a way to free themselves from their chains.

"One of the greatest things about the Cardone's script," says director Nelson McCormick, "is the crossover of genres—it's a cop movie interwoven with a teen terror film. You have a detective who's getting a second chance to bring a killer to justice. The killer is an obsessed man who is driven to insanity by a student he simply must have, to the point that he will kill anyone who stands between him and her. And in the middle of these two men is this young woman, who's experiencing the most magical night of her life, the night of her prom, an event which is synonymous with the end of youth—the death of youth, metaphorically."

Adding to Prom Night's palpable tension is the fact that while their storylines are inextricably intertwined, those three characters—Donna, the Detective and Fenton—don't come together onscreen until the final, cathartic climax. "Our threat is a man who suffers from the same disorder that John Hinckley, Jr. did with Jodie Foster," McCormick explains. "It's called ‘erotomania.' Our killer imagines a relationship that doesn't exist. He imagines that this woman is meant to be with him for the rest of his life and he will do whatever it takes to make that happen.

"There's something very human about it," says the director. "Maybe not to that extreme, but we've all wanted something badly in our lives and have been driven to obsession over it—a job, a car, a spot on a team—so we can relate to this guy on some small level. He's not just a killing machine out to rack up a body count."

"I kept thinking about Seven and The Silence of the Lambs," the director continues. "You had these brilliant minds who are the villains who are always a step or two—or twelve—ahead. You get the sense that they're going to win unless our hero catches a break. The audience is behind him right to the end and it's neck and neck to the finish."