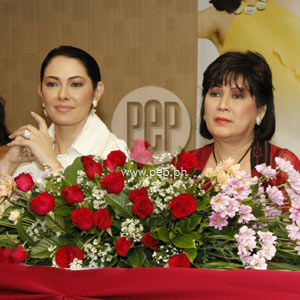 There is much tension between the characters of Ruffa Gutierrez (left) and Annabelle Rama (right) in the comedy flick My Monster Mom. This movie co-produced by GMA Films and Regal Entertainment will open in theaters nationwide on July 2, 2008.


After 35 years, Annabelle Rama stars in her comeback movie, My Monster Mom, co-produced by GMA Films and Regal Entertainment.

Annabelle is cast in this comedy flick along with her real-life daughter, Ruffa Gutierrez. "It's such a joy to be working with my mom for the first time," said Ruffa during the press conference held last June 10 at the Imperial Suites in Quezon City. "This is really a project tailor-made for my mom, and kami namang mga Gutierrez, if it's for our parents or brothers, we let them shine in every which way—hindi kami nagsasapawan. So now, it is my mom's turn to shine, so we let her shine."

My Monster Mom is about a mother who always screams and verbally bashes her three grown-up children. Esme's only daughter, Abby, is played by her real-life daughter, Ruffa Gutierrez. The two sons of the Visayan mother are played by JC de Vera and Mart Escudero—both of whom have different fathers. The young Esme, played by young actress Rhian Ramos, gives her daughter Abby to her brother and sister-in-law. After several years, they are reunited but Abby begins to realize that she and her mother are poles apart.

My Monster Mom is a movie offering from GMA Films and Regal Entertainment that will definitely tickle viewers' funny bones starting this July 2.