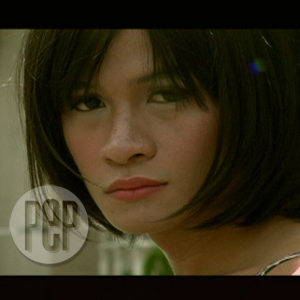 Ping Medina (in picture) stars in all 20 films included in Imahe Nasyon, including this one called Speci Men--whereinthe young actor transforms into a cross dresser.

Imahe Nasyon: Portrait of a Nation after 1986 is underlined by a conceptual question from producers Jon and Carol Bunuan Red: What happened after 1986? It tries to answer the question through an anthology of 20 films that, together, represent "a collective vision of the Philippines."

Imahe Nasyon is conceptualized to commemorate the 20th anniversary of EDSA People Power Revolt as seen in the lens of our very own independent filmmakers. It comprises 20 short films from up-and-coming digital filmmakers as well as from more seasoned filmmakers Lav Diaz, Robert Cabral, Raymond Red, among others.

Quite interestingly, these 20 stories are interlaced to one another by featuring fast-rising independent film actor Ping Medina in all the films. He often portrays leads on in various characters or provides voice over narrations in some features with commendable results.

Ping, son of respected movie-TV-stage actor Pen Medina, says that he did not join any acting workshops. He only sought advice from his father, who appeared with him in Mistulang Kamera Obskura, another short film within Imahe Nasyon, which is about self-imprisonment and image perception.

Imahe Nasyon also features these other short films: Nang Matapos ang Ulan by Lav Diaz, which tackles the story of family, emptiness, and country; La Pula by Roxlee, which is a witty tale of the history of repression; Biyaheng Edsa by Neil Daza, which is a poetic piece about social injustice in the eyes of a petty thief; Barado by Robert Quebral, which narrates the story of two generations of students with the same problems; One Shot by Paolo Villaluna, which describes how politics affects the family.

And more: Dibuho by Lyle Sacris, which interweaves Filipino faces and journeys with stylized innovation of portrait genre; Lugaw by Milo Alto Paz, which talks about free congee in Quiapo; Public Service Announcement by RA Rivera, which criticizes lack of freedom of expression; Aksyon Star, an MTV by Sigfreid Barros-Sanchez; Speci Men by Ellen Ramos, which also features Bella Flores; Ang Manunulat by Topel Lee, which deals with the killing of journalists.

And still more: Tsinelas by Mes De Guzman, which follows the life of the lowly Metro Aide; Local Unit by Tad Ermitaño, featuring the late indie actor Ka Elmo Redrico, which makes us look at a horrifying future; 5 Minutes by Ogi Sugatan, which challenges the audience with issues of patriotism; Between Intersections by Poklong Anading, which reveals street scenes; and Silid by Yeye Calderon, which poses questions regarding art.