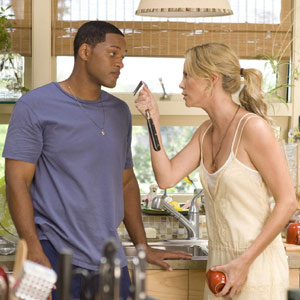 
The Philippines warmly welcomed a brand new superhero that was originally conceived for the big screen (and not based from comic books). Will Smith's action-adventure Hancock opened at No. 1, grossing a high-flying P45.48-million four-day opening weekend nationwide (July 3 to 6) in 137 cinemas. This was announced by Victor R. Cabrera, general manager of Columbia Pictures, which distributed the film.

In Mega Manila, Hancock grossed a staggering P36.21 million, the all-time biggest opening for a Will Smith film, surpassing 1996's Independence Day at P35 million, and last January's I Am Legend at P31.58 million.

In the United States, Will Smith likewise took home the gold medal at the box office with his portrayal of a superhero-with-an-attitude. The film opened with a whopping $66M over the July 4 to 6 period and a solid $107.3M since its launch on night of July 1 with previews beginning at 7 pm.

Hancock tells the story of a tortured superhero who crash-lands in Los Angeles, causing chaos in the city. Edgy, conflicted, sarcastic, and misunderstood, Hancock's well-intentioned heroics might get the job done and save countless lives, but always seem to leave jaw-dropping damage in their wake. Hancock isn't the kind of man who cares what other people think—until the day that he saves the life of PR executive Ray Embrey (Jason Bateman), and the sardonic superhero begins to realize that he may have a vulnerable side after all. Facing that will be Hancock's greatest challenge yet—and a task that may prove impossible as Ray's wife, Mary (Charlize Theron) insists that he's a lost cause.