Rob Schneider stars in "You Don’t Mess with The Zohan" 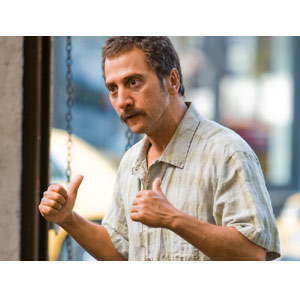 Rob Schneider (in photo), an American actor with Filipino blood, acts opposite Adam Sandler in the comedy, You Don't Mess with The Zohan.


Filipino-American comic sensation Rob Schneider (The Animal, Deuce Bigalow: Male Gigolo) is along for the ride in long-time pal Adam Sandler's latest comedy, You Don't Mess with The Zohan. Schneider's maternal grandmother is a Filipina who met an American soldier while he was stationed in the Philippines.

"I play Salim, a Palestinian cab driver who came to New York to fulfill his dreams," Schneider explains his unpredictably wide role. "He has some residual bitterness—he's harbored a grudge ever since, as a young man, a goat that he was very fond of was taken from him by ex-Israeli commando, The Zohan. That stuck with him, so when he sees Zohan, now a hairstylist in New York, he's shocked by it and plans his revenge."

He adds, "He's not just a cabdriver. He's also a Spiegel catalog salesman. Salim's got about three jobs going simultaneously. He's taking fares and making sales on the cell phone while he drives."

Screenwriter Robert Smigel says that Salim is a guy who never got a chance to show the world what he could do. "He's just an innocent cab driver forced to work 14 hour shifts to get by. He finally sees his chance at some fame when he recognizes Zohan. He's jealous of Zohan's arch-nemesis, the Phantom (John Turturro), who's totally blinged-out. He wants revenge on Zohan, but he also knows capturing Zohan would be a coup, and he wants his little slice of glory."

"I was very flattered that Robert Smigel wrote this part for me," says Rob. "It reminded me of our best Saturday Night Live days where we both came from. He handed me a great character and I knew that I had to knock it out of the park. It's pressure, sure, but it's the best kind of pressure."

To get Salim's accent right, Schneider had the help of a couple of coaches. "I talked with Dr. Salame, a Palestinian physician in Milwaukee. Dr. Salame was nice enough to help me out and put all my lines on tape—and then he did it all in Arabic too."

Memorizing the lines and the accent—that was the easy part. The hard part was staying on his toes. Schneider says, "Adam likes to adlib. So I had all my lines completely down, with the accent—I've got it on paper, spelled out phonetically—and then Adam starts to adlib and I'm like, ‘Ohhhh.' Fortunately, we had Palestinian actors on the set—I would go up to Ahmed Ahmed and ask him, ‘How would you say this?' We were like the Arabic Bowery Boys. It was a lot of fun."

Schneider, who has been a loyal part of Sandler's films from the very beginning, has nothing but praises for his friend. "Adam really did his research, but he found something that was very approachable. I don't think anybody in the world could have played this part except him. There's a real joy to his performance Schneider you get to see him having the time of his life."

Opening soon across the Philippines, You Don't Mess with the Zohan is distributed by Columbia Pictures, local office of Sony Pictures Releasing International.