REVIEW: "100" is a bittersweet view of life on its last leg 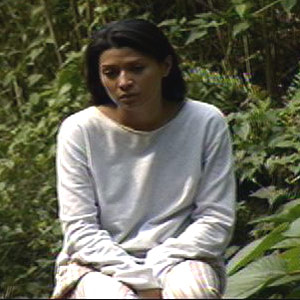 Mylene Dizon ponders about life and death in Chris Martinez's indie film titled 100. Will Mylene take home the coveted Best Actress award? Find out during the awarding ceremony of Cinemalaya 2008 that will take place at the Cultural Center of the Philippines this Sunday, July 20, at 7 p.m.

What will you do if you knew you only had a few weeks to live?


Nothing and everything, according to Chris Martinez's 100, one of the ten full-length feature films competing in the Cinemalaya Philippine Independent Film Festival that runs until tomorrow, July 20. In 100, a female cancer patient, Mylene Dizon, finds out that she has only three months to live. She creates a list of the things she has to do before she dies. At first, the list contains practical undertakings—resigning from work, telling her mother she has cancer, paying off debts. Later, the list expands to the mundane, the frivolous, and spiritual as people close her (Eugene Domingo as Mylene's best friend and Tessie Tomas as her mother) to find out about her condition.


The movie is similar to the Hollywood movie The Bucket List, but only because of the existence of a list. In a previous interview, Direk Chris says the similarities end with the list. The first-time film director says he has never heard or seen The Bucket List, which tells the story of two guys who fulfill their dreams before their kick the bucket.


But whereas the characters in The Bucket List engage in philosophical conversations, 100 does not force its "message" to the viewers. When Mylene and Euguene went to Hong Kong to fulfill one of the tasks on the list, the film did not become a travelogue. And when Mylene viewed Youtube clips of the Eiffel Tower instead of going to Europe, it was as if Direk Chris was mocking the globe-trotting adventures of Jack Nicholson and Morgan Freeman. 100 is neither quirky—a quality that independent films usually have when dealing with serious topics in a casual tone (as in 2007's Juno)—nor hysterical, which local films usually are when they deal about death. 100 is a quiet, sometimes hilarious, often bittersweet illustration of how life can betray you, and what you should do if it did.


Mylene was the right choice for 100's cancer-stricken character. Mylene has played numerous roles—from borderline campy (as the vile kontrabida in TV's Sa Dulo Ng Walang Hanggan) to the offbeat (as Rome in the acclaimed indie film Rome and Juliet). While some may argue this may not be her most remarkable performance, Mylene managed to be affecting—and she didn't have to shed a bucket of tears to do it. Mylene has an aura of strength, as when she deals with lover TJ Trinidad. But she can also be tender and vulnerable, as when she remembers her dead father, who died of cancer, and when she talks with ex-lover Ryan Eigenmann. This range makes her one of today's more moving actresses.


Eugene, an obvious crowd favorite, did have much to do in the film, but she shines even in the little moments. Much of praise should go Direk Chris, of course. He has already tackled the topic of growing old in his award-winning play Last Order sa Penguin but he took it one step further with the Cinemalaya entry 100.


100 will be screened at the Cultural Center of the Philippines at the following times and venues:


The ten-day festival adhering to the theme "Anong Kwento Mo?" officially ends with an awarding ceremony scheduled at the CCP this Sunday, July 20, at 7 p.m.


Click HERE to view movie stills of the full-length films and short films competing in Cinemalaya 2008.