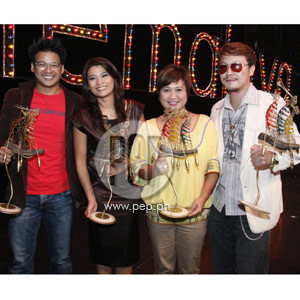 
"It took us four hours to deliberate this year. We did not fight, it's only because we discussed the films very seriously," said Max Tessier to PEP (Philippine Entertainment Portal) right after the awarding ceremony of Cinemalaya held last July 20. This is the second time that the French critic has been included in the jury of the Cinemalaya Philippine Independent Film Festival competition.

The chairman of the five-panel jury of Cinemalaya 2008 revealed that he and the other members unanimously decided to give the Best Film Award to Jay in the full-length category.

The movie directed by Francis Xavier Pasion won "for its sheer originality, its energetic storytelling, its mastery of digital technology in order to tell a story that is a trenchant commentary on the technology itself, and its very revealing take on the media and the uses and abuses of the truth..." Aside from earning the Best Actor plum for Baron Geisler, it also won for Best Editing.

Jay, which was shot in Bacolor, Pampanga, tells the story of Jay Mercado, a homosexual teacher who was brutally murdered in his home. Jay Santiago (played by Baron) produces a documentary on the slain teacher and helps bring the criminal to justice.

Cinemalaya is an all-digital film festival and competition with the objective of discovering, encouraging and honoring the cinematic works of Filipino filmmakers that boldly articulate and freely interpret the Filipino experience with fresh insight and artistic integrity.

Special Jury Award: My Pet for the brave use animation as a medium of storytelling

Special Jury Citation: Angan-Angan for its depiction of the Mindanao culture and their people's desire for education