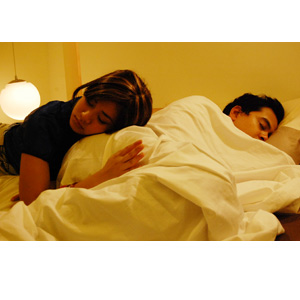 One of the best scenes and is a defining moment for Miggy, the character of John Lloyd Cruz. After realizing what his editorial assistant Laida, the character of Sarah Geronimo, sacrificed for him—things began changing.

I was initially skeptical about this movie project of Star Cinema and Viva Films.

First, if one mentions Sarah Geronimo's name, I automatically remember her as a singer, not as an actress. I know about her TV series in the past, but those few times I watched them can't be a good gauge of her acting skill.

Second, if one mentions John Lloyd Cruz's name, I automatically associate him with Bea Alonzo. Their love team has a huge following, and their chemistry has been tried and tested by the producers. I know the guy can act and that he is more than ready to go solo. But honestly, Sarah is simply not the leading lady I have in mind.

I saw the trailer three weeks ago, I must admit it had curious. "Mukhang nakakaaliw," said one of the girls in the office.

But when I finally saw movie, I must say my initial reservations were unfounded. "It's nakakaaliw...and more"

Here are five reasons why it's a must-see movie:

1. Sarah Geronimo is a natural. She can be ridiculously funny, utterly charming, and madly in love with the man of her dreams without being OA (overacting) or TH (trying hard). I like the way she assimilated the character of Laida. It's as if the role was created for her.

Another thing, she's not self-conscious at all, unlike some of the young actresses who seem more concerned about how they look. In short, walang arte and walang kiyeme. Her portrayal of the role reminds me of Anne Hathaway in Princess Diaries and even The Devil Wears Prada.

2. John Lloyd is quite effective in playing the "Scrooge" character of Miggy. I am using the word "quite," because it is quite impossible to despise a guy who's very handsome on screen. As a young boss who runs a magazine, he is difficult to work with, but not formidable enough. I don't know if that's the director's real intent.

The scene with his dad, who is played by Dante Rivero, is one stirring moment. John Lloyd's delivery, his facial expression, and his emotions are all expressed intensely. I find myself crying as well.

He looks good and he is good.

3. The movie has a commendable cast. Rowell Santiago, who is Miggy's hard-to-please half-brother, has a very satisfactory performance. He has very few scenes with the male lead, but he's successful in wreaking havoc on his younger brother's life.

Dante Rivero's few lines have rendered the moviegoers speechless, while Matet de Leon's one-liner has elicited cheers from most of the people in the cinema.

4. The story is neither too profound nor too light. Tamang-tama sa panlasa ng Pinoy.

It's about a guy who has always wanted to be number one, even at the expense of the people around him and that one person who truly loves him.

It's about a young girl whose views about life and love are very optimistic. But when she finally encounters the harsh realities, she realizes the downside of her being idealistic.

It's about finding one's self, accepting the will of fate, and being brave enough to pursue happiness.

The movie has introduced several out of the box ideas—the post-it notes on the boss's cup of coffee, the now popular "sun dance," and of course, Miggy's super kilig way of winning back the heart of Laida.

There are a few lapses, like the distracting hairdo of Laida and the lighting effect during that "rainy" scene towards the end, but I will not make an issue out of them.

What's important is that the movie has erased my skepticism about Sarah's acting, her first team-up with John Lloyd, and even...love!