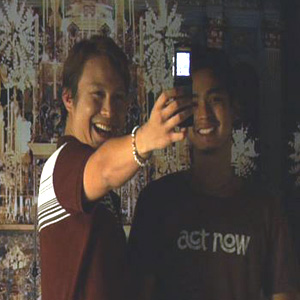 Baron Geisler (left) and Coco Martin (right) topbill the digital film Jay, which is chosen as one of the 18 feature films included in the Orizzonti (Horizons) sidebar section of the 65th Venice International Film Festival.


Two Filipino films have been chosen as the opening and closing films of the Orizzonti (Horizons) sidebar section of the 65th Venice International Film Festival. Considered the oldest film festival in the world, the Venice IFF has several sections, including Venezia 65 (an international competition of feature films running for the Golden Lion), Out of Competition, Orizzonti, and Corto Cortissimo.


Barely two weeks after bagging the Best Film award in Cinemalaya 2008, Francis Xavier Pasion's Jay will take part in its first international filmfest. The digital film starring Baron Geisler has been included in the lineup of the Venice IFF that is scheduled to take place from August 27 to September 6.

According to Ferdy Lapuz of Ignatius Films Canada, Direk Francis will be competing for the Luigi de Laurentiis Award. The cash prize of $100,000 will be given to the Best Debut Film chosen by an international jury and will be divided equally between the director and producer.

Jay will be the first feature film in competition that will be screened for the Orizzonti sidebar of the Venice IFF. It will be shown in Venice's Lido on August 29. The digital film gives viewers a revealing look into the way media manipulates people, and vice-versa, making it a suitable entry to a section that features works "suspended between fiction and documentary," as Ferdy Lapuz puts it.

MELANCHOLIA. Lav Diaz once again has the honor of being the closing film of the Orizzonti section of the Venice IFF. Last year, his nine-hour film Kagadanan Sa Banwaan Ning Mga Engkanto (Death in the Land of Encantos) was also the last film screened and was awarded a Golden Lion Special Mention.

His dramatic movie Melancholia will have its world premiere at the 2008 VIFF. The movie is about people who try to survive the sadness and the madness in this world. The cast members of Melancholia include Angeli Bayani, Perry Dizon, Roeder Camañag, Raul Arellano, Dante Perez, Malaya, and Soliman Cruz.