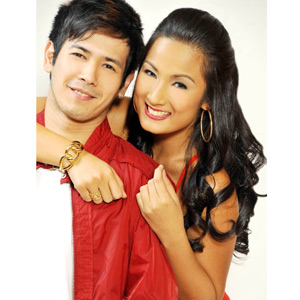 Even though John Prats and Ehra Madrigal come from rival networks, ABS-CBN and GMA-7, they will be teame dup together in the movie Loving You, which is produced by Studiomax and released by Regal Entertainment. It will have its premiere night on August 17 at SM Megamall.


Kapamilya and Kapuso stars team up in Loving You.

Two-time FHM Philippines cover girl Ehra Madrigal and the Philippines' Dance floor Dynamite John Prats have teamed up as a socially mismatched but sexy pair in Studiomax's feel-good romance, which opens in theaters nationwide on August 20.

John plays a hardworking taxi driver named Axel while Ehra is Bry, a sleep-deprived call center agent. Both of them struggle to make their dreams come true. He prefers to work double shifts to meet his boundary while she would rather go to all the VTR auditions she could go to, in the hopes of landing a lucrative commercial modeling contract. Although their values are different, Axel feels an affinity for the female call center agent whom he drives to work every day.

Their pursuit for the good life slows down when conflicts arise—Axel comes face-to-face with the father whom he hasn't heard from in years while Bry is betrayed by her live-in boyfriend. These events lead the driver-passenger relationship to take a more romantic turn.

Her newest leading man couldn't help but be awed by her spontaneity, mesmerizing screen presence, and remarkable talent. John swears Ehra will enthrall viewers as he was enthralled by her. "Ngayon lang sila makakakita ng sexy na nagbi-breakdown lagi." Ehra credits the charming John for making her feel very comfortable and revealing a new dimension to her sexy side.

Continue reading below ↓
The other exciting twosomes in Loving You are JC de Vera & Yasmien Kurdi, Polo Ravales & Jean Garcia, and Aljur Abrenica & Kris Bernal. This film, written by Fairlane Raymundo and directed by Don Cuaresma, is produced by Studiomax and released by Regal Entertainment.