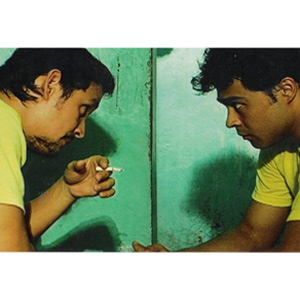 Emilio Garcia (left) and Sid Lucero (right) have intimate scenes in the indie film Selda, which will compete in the 32nd Montreal World Film Festival. Directed by Paolo Villaluna and Ellen Ramos, Selda is the first Filipino film to compete in the world section of the FFM.


The closeness of two prison inmates, portrayed by Sid Lucero and Emilio Garcia, will be showcased in the 32nd Montreal World Film Festival. Selda, the second feature film of directors Paolo Villaluna and Ellen Ramos, has been invited to take part in the world (main) competition section of the film fest, which will take place in Canada from August 21 to September 1, 2008.

The Festival des Films du Monde-Montréal (FFM) is one of Canada's oldest international film festivals. The 32nd edition will showcase 234 feature films including 105 World or international premieres. This marks the first time that a Filipino film is competing in the world section of the Montreal Film Fest.


Selda, which was shot inside the New Bilibid Prisons in Muntinlupa, also stars Ara Mina as the partner of Sid's character. This film will compete with 19 other entries in the World Competition program of the FFM.

In 2005, the coming-of-age story of an effeminate young boy, Ang Pagdadalaga ni Maximo Oliveros, won the Golden Zenith award in the First Films competition in the 29th edition of the same film fest.

According to Ferdy Lapuz of Ignatius Films Canada, Sid, Emilio, and Direk Paolo and Ellen will attend Selda's international premiere in Montreal. This trip will be subsidized by the Film Development Council of the Philippines headed by Jacky Atienza.

Mark Rydell, the director of On Golden Pond and The Rose, is the jury president this year. Quebec novelist Dany Leferrière, actress Evelyne Bouix, public representative Johanne Dugas, as well as directors Xie Fei and Vojtech Jasny are also sitting on the jury.