Journey "For the First Time" with Richard and KC 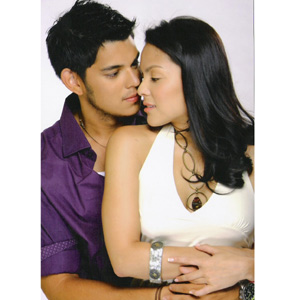 The characters of Richard Gutierrez and KC Concepcion spend an unforgettable summer in Santorini island in Greece. Directed by Joyce Bernal, For The First Time will open in theaters nationwide starting August 27, 2008.


Richard Gutierrez and KC Concepcion will soon be seen together for the first time on the big screen for the movie titled For The First Time. Their characters meet in Greece and they spend an unforgettable summer together in a lovely village built on tall cliffs, offering a breathtaking view over a submerged volcano.

The cast members of this Star Cinema film shot the movie in the beautiful Santorini island in Greece, which was created because of a volcanic eruption. KC describes this island as a place in between two famous Hollywood settings: on one side was the setting of the movie Sisterhood of the Traveling Pants while on the other side was the island where Hollywood stars shot the movie version of Mamma Mia!

Richard is referring to Big Foot Entertainment's film school in Cebu called the International Academy of Film and Television. Students of the IAFT are guided by filmmaking and acting professionals who have worked on major projects in Hollywood.

After having a memorable time in Greece, Seth runs away since he becomes too scared of being involved in a long-term commitment with one woman. But after coming to his senses, Seth returns to Manila to pick up where he left off with Pia. Will the young lady accept his apology or will she harbor anger for what he has done?

For the First Time marks several firsts: it is the first movie of the daughter of Sharon Cuneta and Gabby Concepcion; it is the first time that Richard has worked with Star Cinema; and it is also Richard's first time to work with a female director in the person of Joyce Bernal. This film is also part of the 15th anniversary celebration of Star Cinema.

The GMA-7 star enjoyed working with Direk Joyce Bernal for the first time. "[It was] very fun. Actually kami na, e," he joked. "Masaya siya talaga kasama. [It's my] first time to work with a female director. This is another first for me. Nakakapanibago lang. I like her. She opens you up, [she tells me] ipakita mo kung anong totoo."