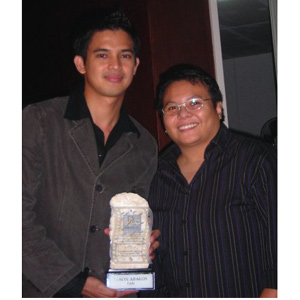 Jason Abalos shows off the award that he received from the Young Critics Circle during the 18th Annual Circle Citations (YCC Awards) for Distinguished Achievement in Film. The Star Magic talent is joined by YCC member Eloi Hernandez.


Last August 7, the Film Desk of the Young Critics Circle honored the winners for the 18th Annual Circle Citations (YCC Awards) for Distinguished Achievement in Film for 2007. The awarding ceremony took place at the Pulungang Recto of Bulwagang Rizal (Faculty Center Conference Hall) in the University of the Philippines-Diliman.


Established in 1990, YCC is the academe-based critics group with members coming from various disciplines. Through the years, they have become attentive observers of Philippine cinema constantly bringing into the analysis of film an interdisciplinary approach.

Among those who attended were filmmakers Brillante "Dante" Mendoza, Jade Castro, and Nick Deocampo. The latter was chosen to give the keynote address-signaling the first time a filmmaker is handpicked for the pivotal task that has become an annual YCC tradition.

Here are the winners and nominees for this year's YCC film awards: