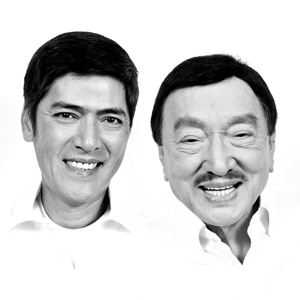 The King and Prince of Comedy conspire to deliver laughs in Dobol Trobol: Get Redi 2 Rambol. Dolphy (right) and Vic Sotto (left) star in the comedy film that will open in theaters nationwide this Wednesday, August 13.

DREAM PROJECT. After years of anxious anticipation, the two royalties of Philippine comedy expressed excitement that the fans and the general viewing public will finally witness their tandem.

Trouble begins when management hired Vic's character to assume Dolphy's post. Threatened by the young upstart, Dolphy went all out to discredit Vic in the eyes of the bosses. Dolphy's woes were compounded when Vic fell in love with his unica hija.

Caught in various riotous comic situations, Dolphy and Vic will leave the audience in stitches as they exchange banter and witty punch lines. Complementing the funny duo's comedic skills are state-of-the-art special effects that are seldom used in local comedy films of today.


Zsa Zsa Padilla and Pia Guanio, the ladyloves of the top comedians, have special cameo roles. Directing the film is Tony Reyes with Bibeth Orteza writing the film script with additional input from Dolphy and Vic themselves.