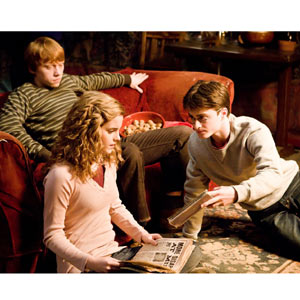 The trailer of Harry Potter and the Half-Blood Prince will be shown as an added attraction to the computer-animated adventure, Star Wars: The Clone Wars. (From left) Rupert Grint, Emma Watson, and Daniel Radcliffe reprise their roles as Ron Weasley, Hermione Granger, and Harry Potter.


The highly anticipated first trailer for Warner Bros.' Harry Potter and the Half-Blood Prince makes its debut in Philippine theaters on Wednesday, August 20, as an added attraction to the computer-animated adventure, Star Wars: The Clone Wars.

The big reveal in the trailer is a glimpse of the young Tom Riddle, who grows up to become the wizarding world's most malevolent force, Lord Voldemort.

Producer David Heyman said, "I am really excited that director David Yates and all our cast are back for the sixth film and welcome some wonderful new additions to our ensemble. We all share a commitment to J.K. Rowling and to Harry Potter fans around the world to keep making these films the best they can be and, as we head into the final installments, I can promise that this level of commitment will not waver."

In Harry Potter and the Half-Blood Prince, Lord Voldemort is tightening his grip on both the Muggle and Wizard worlds and Hogwarts is no longer the safe haven it once was. Harry suspects that dangers may even lie within the castle, but Dumbledore is more intent upon preparing him for the final battle that he knows is fast approaching.

Two award-winning actors are joining the film's all-star cast in their first Harry Potter film. Academy Award winner Jim Broadbent has been set to play Potions Professor Horace Slughorn, who gives Harry an old Potions textbook that had once belonged to the Half-Blood Prince, which proves invaluable to the young wizard. Award-winning actress Helen McCrory will play Narcissa Malfoy, mother to Draco Malfoy and sister to the evil Bellatrix Lestrange.

Additionally, several young newcomers will be making their feature film debuts: Jessie Cave has won the role of Lavender Brown, who has eyes for Ron Weasley. Nine-year-old Hero Fiennes Tiffin is playing the role of the young Tom Riddle at age 11, while 16-year-old Frank Dillane is playing the teenage Riddle, who is already on the path to becoming the evil Lord Voldemort.

Opening across the Philippines this November, Harry Potter and the Half-Blood Prince will be distributed by Warner Bros. Pictures, a Warner Bros. Entertainment Company.