Watch KC and Richard in Greece "For the First Time" 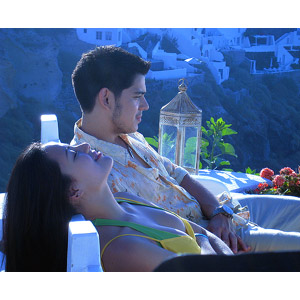 
After a ten-day trip in Greece, Star Cinema's newest love team Richard Gutierrez and KC Concepcion share their experiences in Santorini island and the things they discovered about each other.

For her part, KC reveals that Richard was also very nurturing but he spent every chance he could get to catch his much-needed sleep. "Sobrang takaw-tulog po si Chard! Apart from that, talagang mabait siya sa lahat," she says. The GMA-7 star defends himself by saying that he has not been getting enough sleep for the past three years, so he took this opportunity to get enough sleep and gather energy for the work ahead.

The movie's title, For The First Time, not only refers to their first tandem but also their first-time experiences in doing the film. This movie marks the first time that Richard is working with ABS-CBN's film outfit, Star Cinema. This is also his first time to work with Ms. Joyce Bernal.

Greece is a seismically active island because of the presence of many volcanoes. Around 3,500 years ago, Santorini witnessed an awesome volcanic explosion that occurred in the Aegean Sea. This resulted in a huge caldera that is approximately four miles in diameter.

One experience that is very memorable for Richard and KC was the earthquake that occurred in Santorini on their second day. Aside from that incident, the stars simply enjoyed the wonders of Greece. "Halos lahat po ng pagkain sa Greece, lahat ng salads natikman namin. Naglakad-lakad po kami dun, so nakapag-usap po kami ng maayos bilang magkaibigan," reveals KC.

Mall shows of For The First Time are scheduled for August 17 (SM Bacoor), August 23 (Glorietta) and August 24 (SM North Edsa).