Join the "Sisterhood of the Traveling Pants 2" 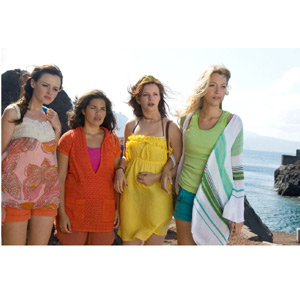 (From left) Alexis Bledel, America Ferrera, Amber Tamblyn, and Blake Lively are now dealing with college life in The Sisterhood of the Traveling Pants 2.


Amber Tamblyn, America Ferrera, Blake Lively, and Alexis Bledel reunite onscreen in Warner Bros.' endearing drama The Sisterhood of the Traveling Pants 2 as the lifelong best friends that audiences fell in love with three years ago.

Based on Ann Brashares' best-selling series of novels about four young women who share an unbreakable bond through the unpredictable events of their lives, the sequel catches up with Tibby, Carmen, Bridget and Lena in the months following their first year of college.

Having been apart all year, their plans for the summer will take them even further along separate paths as each experiences the freedom, love, choices and challenging life lessons that mark their individual journeys toward adulthood. Now it will take more than a hurried note...or even a treasured pair of pants passed back and forth among them to keep their lives connected.

Feeling displaced at home with her mother expecting a new baby, and disappointed that her friends opted to spend the summer away, Carmen (Ferrera) accepts a chance invitation to work backstage at a theater festival in Vermont. There, she surprisingly finds herself thrust into the spotlight for the very first time and simultaneously becomes the focus of the play's handsome young leading man.

Tibby (Tamblyn), meanwhile, remains in New York City to wrap an NYU film project while cautiously taking her relationship with Brian McBrian (Leonardo Nam) to the next level. When an unexpected crisis complicates everything, she must finally face her fear of getting close if she wants to let love in.

Bridget (Lively), still struggling with the loss of her mother and with questions about her past, travels to Turkey for an archeological dig before realizing that the truths she needs to uncover are buried closer to home.

And Lena (Bledel), separated from first love Kostos (Michael Rady) and studying at the Rhode Island School of Design, meets a free-spirited fellow art student (Jesse Williams) who forces her to choose between holding on to her memories or mending her heart and pursuing an exciting new love.

For Tibby, Carmen, Bridget and Lena, communication was always as easy as breathing. Now, new priorities and rapid changes make it harder for them to keep in touch. Messages are sometimes missed...or misunderstood. But when it matters most, they will still reach out to those who know them best.

Finding a way to share their experiences as they always have, with heart and humor, they will come to value more than ever the immeasurable power of their friendship.

Opening soon across the Philippines, The Sisterhood of the Traveling Pants 2 will be released worldwide by Warner Bros. Pictures, a Warner Bros. Entertainment Company.
Read Next
Read More Stories About
movies
Post a Comment
Featured
Latest Stories
Trending in Summit Media Network