"Loving You" gets PG-13 rating 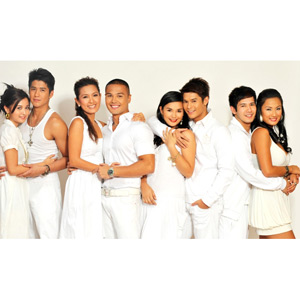 Cheers were given off by the crowd when the entire Loving You cast arrived all clad in pink during the premiere yesterday, August 17. The red carpet area of the cinema walkway glittered with the smiles of Yasmien Kurdi, JC De Vera, John Prats, Ehra Madrigal, Kris Bernal, Aljur Abrenica, Polo Ravales and Ms. Jean Garcia. Their celebrity friends, VIP guests and family members made the night truly glamorous and more exciting for the hordes of moviegoers that flocked to SM Megamall.


Viewers enthusiastically described the movie as "very heartfelt," "lots of super kilig to the bones moments," "honestly written," "very intriguing and sexy," and also "very enlightening" because of the movie's theme about the call center situation in the Philippines.


Kudos must be given to Loving You screenwriter, Fairlane Raymundo, for writing memorable lines that gave romantic depth and honesty to all the main characters. All in all, the movie successfully transcended the romantic sweetness and kilig factor of each character to the audiences.


Unforgettable film highlights according to Loving You viewers are: JC De Vera's breakdown scene in the basketball court—his vigorous training in Babangon Ako't Dudurugin Kita evidently paid off, according to the viewers. Yasmien and JC's heartbreaking confrontation at the baywalk-their romantically charged kissing scene was extremely felt. Yasmien's version of the "Loving You" theme song was perfectly played during her teary eyed moment with JC de Vera in the movie. Ehra Madrigal's performance as a quirky and aspiring model was noted by the audience.


The audience members laughed heartily when Polo and Jean were caught making love in the sofa by Jean's mother. Even Kris Bernal's fiery confrontation with John Lapus drew out laughter from the audience. John Prat's portrayal as a head over heels in love taxi driver was also given special notice.


Director Don Cuaresma was very proud on the good reviews he received during the premiere. With all his hardwork and meticulous supervision from trailer editing, dubbing, sound mixing until viewing the final movie print, he thankfully exclaimed, "I always make sure to give my very best in every project I make, especially with Regal. All in all, it was worth it!" Regal producers Mother Lily Monteverde and Roselle Monteverde-Teo have already discussed plans for Direk Don Cuaresma's next project.


Garnering a PG 13 rating, Loving You opens in August 20 (Wednesday) in all theatres nationwide.