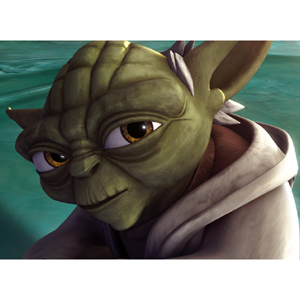 The character of Master Yoda (in photo) is voiced over by Tom Kane in the animated film Star Wars: The Clone Wars. This Warner Bros. movie is scheduled to open in theaters all over the Philippines starting today, August 20, 2008.


A tinge of Anakin Skywalker's coming dark side clearly is visible in Star Wars: The Clone Wars. Yet the animated adventure mostly harks back to the fun, swashbuckling times of the original Star Wars trilogy.

Lucasfilm Animation has crafted a movie nicely tucked in to Anakin's early heroic days, before his transformation into the evil Darth Vader. Along for the ride are noble-hearted clone soldiers with the camaraderie of Marine grunts, inept android warriors as idiotic as the Three Stooges and a young protege who rivals Anakin for cockiness and affectionately calls him "Sky Guy."

Dave Filoni, director of the movie, said the idea was to return to the wisecracking tone of the original Star Wars in 1977, before the gloom of Anakin's fall. "I wanted this to have the banter. I wanted this to be funny," he shared. "Telling that dark story of Anakin Skywalker was important for George, but this was a chance to show Anakin before that. Anakin as a hero, Anakin as the good guy, Anakin more like his son, Luke Skywalker, of the original trilogy."

The Anakin in Clone Wars is a hybrid of Luke and his rascally ally, Han Solo, Filoni said. "He's cocky like Han, he can do a lot of things like Han, he's clever with machines like Han. But he's naive like Luke. The whole galaxy is a bit overwhelming," Filoni said.

Characters not seen in the live-action movies include conniving assassin Asajj Ventress; Jabba's sinister uncle, a giant slug that speaks with a Truman Capote-like Southern drawl; and Captain Rex, a loyal member of Anakin's clone crew.

The main newcomer is Ahsoka Tano, a teenage girl from an exotic alien species who's assigned as Anakin's Jedi apprentice. With mischievous wit, Ahsoka breaks down Anakin's stiff facade and reluctance to take on a student, the two establishing a flippant rapport as they slice up droids with their light-sabers, scale a daunting summit on a rescue mission and play nursemaid to Jabba's kidnapped baby son.

"She definitely brings a fun side out of Anakin. I think they have such a great relationship," said Ashley Eckstein, who provides Ahsoka's voice. "Ahsoka is very eager to prove herself, and I don't think she would allow Anakin not to accept her."

The movie offers a glimpse of the inner turmoil that contributes to Anakin's turn to the dark side. Crash-landing on his home planet of Tatooine, Anakin momentarily bears a haunted look as he's asked about the desert world, where he exacted a savage revenge over the death of his mother in Attack of the Clones. "I was hoping I'd never have to lay eyes on this dustball again," says Anakin.

Opening with a variation on John Williams' familiar Star Wars theme, the movie is heavy on humor. Anakin devises an amusing low-tech way for him and Ahsoka to sneak inside a droid energy shield. Obi-Wan engages in a witty surrender negotiation with a general who speaks in a Sean Connery brogue. When a droid falls off a cliff and smashes on the ground, his superior leans over and barks: "Get back here, sergeant."

A few veteran Star Wars performers provide voices for the movie, including Samuel L. Jackson as Mace, Christopher Lee as Dooku and Anthony Daniels as C-3PO. Taking over from Hayden Christensen as the voice of Anakin is Matt Lanter, while James Arnold Taylor does Obi-Wan, who was played by Ewan McGregor in the prequel trilogy.

Anakin remains a bit rash, but he has graduated from apprenticeship to Obi-Wan to take the lead on his own missions as an equal to his former master. "With this movie and also the ongoing series, we're going to see the banter between Obi-Wan and Anakin. We're going to see them as comrades, as buddies," Lanter said. "It is reminiscent of some of the original Star Wars. It's got that comic relief in it and has kind of that old-school feeling."

Lucas initially planned just a TV show. But as he viewed the first footage, he said, "This looks great. The fans should really see this on the big screen," said Filoni, who came to Clone Wars after working on the animated series Avatar: The Last Airbender.

Filoni and his collaborators reshaped a story arc developed for the series into a stand-alone tale they could tell as a theatrical movie.

The computer animation borrows from the striking panoramas of Japanese anime, while the characters have a chiseled look and movements vaguely reminiscent of the 1960s puppet adventure series Thunderbirds.

Though animated, the world is recognizably Star Wars, from Yoda's twitching frowns to the hum of the light-sabers.

Opening across the Philippines today, August 20, Star Wars: The Clone Wars will be distributed worldwide in theaters by Warner Bros. Pictures, a Warner Bros. Entertainment Company.