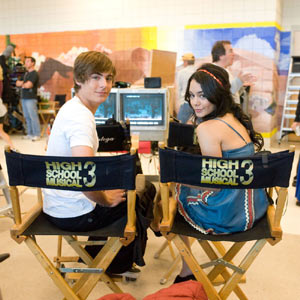 Efron, Hudgens and Tisdale join Lucas Grabeel, Corbin Bleu and Monique Coleman as they all return to the roles they created in the international smash hit High School Musical and the record-breaking High School Musical 2. Kenny Ortega, who helmed the first two films for Disney Channel, once again directs, adding new duties as executive producer.

High School Musical 3: Senior Year finds high school seniors Troy and Gabriella facing the prospect of separation as they head off to different colleges. Joined by the rest of the Wildcats, they stage an elaborate spring musical reflecting their experiences, hopes and fears about the future. With incredible new music and exciting dance numbers designed to take maximum advantage of the big screen, this motion picture extravaganza delivers plenty of high-energy entertainment from East High's talented ensemble.

"The first time I read the script, my immediate reaction was that it would be a great legacy for the Wildcats to leave behind," says Zac Efron. "It sums up a lot of storylines and all the characters really grow. There are also a lot of great songs and every different kind of music, from rock to R&B; pop and solo and group numbers and romantic duets."

Asked what how different Senior Year will be from the first two High School Musicals, director Kenny Ortega says, "We have more money and a little bit more time, so this film is going to be bigger and more dimensional. You'll see that especially in the dance numbers. We've got a number on the basketball court, up on a rooftop, in a junkyard, in a tree house, and there's a great range of styles, which has been great fun for me. There's a little bit of Broadway in there, a little bit of funk and hip-hop, as well as ballet and ballroom. It's been much more challenging for the whole cast."