"Loving You" features love stories inside the call center industry 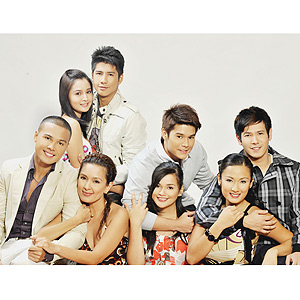 A lot of Filipinos will be able to relate to the characters of Kris Bernal and Aljur Abrenica (standing) as well as (from left, seated) Polo Ravales and Jean Garcia, Yasmien Kurdi and JC de Vera, and John Prats and Ehra Madrigal. Loving You, which is now showing in theaters nationwide, presents the intricate lives of people working in the call center industry.


The Business Process Outsource (BPO) industry, commonly called as call centers, continues to spread in the country like mushrooms. In fact, this is one of the industries that gives a lot of employment opportunities to the growing number of jobseekers today.

We've heard a lot of stories about the working relationships between the call center agents. And this is one of the reasons Fairlane Raymundo wrote the story of Loving You—to show the kinds of romantic liaisons that happen inside call centers.

Studiomax, together with Regal Entertainment, presents the exciting lives of call center agents as they try to be successful at work and find a special someone at the same time.

Before they actually shot the movie, Direk Don did research about BPO employees, while the actors underwent some call center training as well as familiarization of the workplace to make their portrayal more realistic.

Loving You features four pairs of celebrities, three of which are real on-screen partners. They are JC de Vera and Yasmien Kurdi, Polo Ravales and Jean Garcia, Aljur Abrenica and Kris Bernal, and John Prats and Ehra Madrigal.

TALENTS OF DIFFERENT NETWORKS COMBINED. Aside from featuring love stories among call center agents, another highlight of the film is seeing talents of two rival networks work together to make this a worth-watching film.

While most of the love teams, except for John, came from GMA-7, their director is also identified with ABS-CBN.

For Direk Don, this was a good opportunity to handle different actors aside from the Kapamilya artists that he usually supervise. In fact, he said, "Ang pinakamagandang experience lang dito, I was given the chance to work with GMA-7 stars kasi Kapamilya network ako. Masayang-masaya ako kasi tinanggap ko ang trabahong ito at nakatrabaho ko sila."

This is also how some of the Kapuso artist felt when they worked with Direk Don.