"Thank You Girls" to be screened on August 28 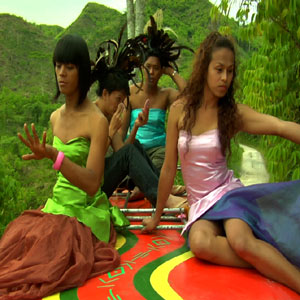 Six dysfunctional gay beauty pageant contestants travel onboard an orange jeep in the indie film The Thank You Girls (TYG). This will be screened at the Cine Adarna of UP Diliman on August 28, 2008.


In gay lingo, beauty pageant candidates who do not make it as semi-finalists are called "backstage beauties," "clappers," or "thank you girls."

The writer of the box-office hit Daybreak and Asian Film Awards nominee Charliebebs "Bebs" Gohetia ventures into his first full-length directorial debut with a fun and funny gay film about beauty pageant losers in the indie film The Thank You Girls (TYG).

TYG is an interesting, intelligent comedy about six dysfunctional gay beauty pageant veterans who embark on a journey from their hometown Davao City to Cagayan de Oro City to join a big contest riding in a brightly colored orange jeep.

This indie film provides a breath of fresh air from the usual gay films released this year about tragedy and sex. Shot for ten days in the breathtaking landscapes of Davao, Bukidnon and Cagayan de Oro, Bebs cast nonprofessional Visayan actors for the film, most of them real beauty pageant contestants in Davao.

"In TYG, crossdressing gays are not the subject of ridicule but are portrayed as intelligent, strong individuals who have dreams, aspirations and personal issues like anybody else. This wonderful, colorful side of gayness is rarely explored in films and I hope that after watching TYG, the audience will be more understanding and more accepting of how diverse the world is," says Bebs.

Aside from being Bebs' first full-length film, TYG offers other firsts. This is the first production venture of New York based film outfit Brooklyn Park Pictures, the first line producing job of renowned indie director Adolfo Alix, Jr., and the first movie to use Visayan gay lingo as its language.

"What's unique about the film is that it transcends gender preferences and sexuality. Gays will love TYG for its fabulous costumes and its empowering message. Women will love it for its wit. Straight men will learn from it," comments James R. Hohl, the film's executive producer.

TYG has already been invited to compete at an international film festival in September. But before that, Filipinos will have a chance to watch its world premiere with Tagalog subtitles on August 28, 2008, at the UP Cine Adarna (formerly UP Film Center) in Diliman, Quezon City at 6:30 p.m.