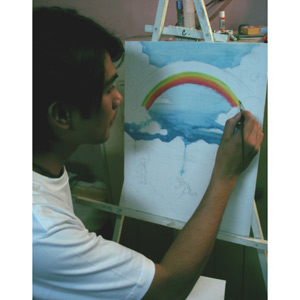 PJ Lanot (in photo) is the lead character of the mockumentary Shorts, a Pinoy short film that will compete in the 12th Thai Short Film and Video Festival.


Shorts, a short film about a young copywriter/production designer who seems to have gone crazy, will compete in the 12th Thai Short Film and Video Festival. The said film fest will run from August 29 to September 14 at the Bangkok Art and Culture Center, Pathumwan Junction.

Two other Filipino films, Raya Martin's Childhood in the Philippines Islands, undated (Infancia en las Islas de Filipinas, sin fecha) and Marlon Fuentes' Bontoc Eulogy, will be screened as part of the S-Express Philippines program on September 10. S-Express is a traveling short film program of some of the region's most outstanding and notable independent filmmakers to be presented by the respective curators from each country.

Film festival project coordinator Sanchai Chotirosseranee, also an S-Express Thailand programmer, revealed that "the tougher short competition program [was] selected from more than 400 shorts from around the world." The jury for this section are Ekachai Uekrongtham, director of Beautiful Boxer (Panorama in Berlinale 2003) and Pleasure Factory (premiere at Un Certain Regard 2007), and Prawich Tangeaksorn, a noted Thai film critic and lecturer.

The festival will also offer special short programs which have never been shown or premiered in Thailand. Exclusively granted the green light, this year's festival proudly presents the best selection from Clermont-Ferrand Short Film Festival, the world's biggest film festival of its kind, to be attended by French programmer Roger Gonin, the Queer Shorts program which selects international shorts to celebrate the variety and fluidity of human sexuality, the Airplay program portraying the behind-the-scene of the à la mode music video from popular British singers and bands, and award-winning Thai shorts arraying in the international film festival circuit during the recent years. Martin Thau of the Munich Film and Television Academy will also conduct a special screenwriting workshop from August 23 to 27.

The short film earlier won third prize in the Viva - Pinoy Box Office (PBO) Digitales 2 short film competition and will also compete in the Bite the Mango Film Festival from September 19 to 25 at the National Media Museum in Bradford, West Yorkshire, United Kingdom.

Direk Seymour is an advocacy filmmaker, a freelance writer, and a mass communication professor.