"For The First Time" graded B by Cinema Evaluation Board 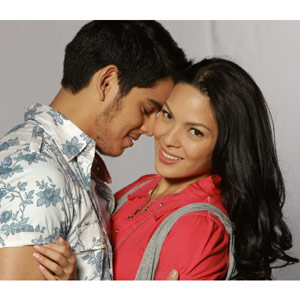 Richard Gutierrez and KC Concepcion's first movie together, For The First Time, has been given a grade of "B" by the Cinema Evaluation Board. The premiere of the movie is scheduled tonight, August 26, and it will open in theaters nationwide on August 27.


The Star Cinema film starring KC Concepcion and Richard Gutierrez has been graded "B" by the Cinema Evaluation Board. Directed by Bb. Joyce Bernal, For The First Time was shot in Greece and is part of the 15th anniversary celebration of Star Cinema. This entitles the film to a 65% amusement tax rebate.

The movie will have its premiere night tonight, August 26, at SM Megamall, with tinseltown's hottest stars expected to grace the event.

Last Sunday, GMA-7 star Richard Gutierrez appeared for the first time on ABS-CBN's variety show ASAP ‘08. He sang "No Matter What" as ABS-CBN leading ladies appeared one by one to welcome the Kapuso star. Among those who greeted him were Nikki Gil, Roxxane Guinoo, Anne Curtis, Sarah Geronimo, and even his sister Ruffa Gutierrez, who is one of the hosts of The Buzz. When Angel Locsin came out on the ASAP ‘08 stage, she put her hands around Richard, her former love team partner before she transferred to ABS-CBN.

Richard expressed his gratitude for the chance to visit ASAP ‘08. "I feel so blessed na nabigyan ako ng pagkakataon na mabisita kayo even for such a short time. I'd like to thank my home network for allowing me to be here."

Ricahrd replied: "Thank you. It's been one hell of a ride. Thank you at binuksan mo ang puso mo."

KC Concepcion also had her own segment wherein she was given red roses by the young heartthrobs of ABS-CBN, namely Gerald Anderson, Zanjoe Marudo, Luis Manzano, Sam Milby, John Lloyd Cruz, and Piolo Pascual. Afterwards, she sang The Beatles' "In My Life." She was surprised to find that Gabby Concepcion had prepared a video of himself singing the same song. Tears welled up in her eyes as she said, "Teka lang, nasa Mars pa ako ngayon. For the first time, nag-duet kami ni Papa! Pa, thank you for singing with me. Thank you, Pa, I love you so much," said KC. The daughter of Gabby and Sharon Cuneta also took this opportunity to greet her stepfather Kiko Pangilinan a happy birthday.


INTERNATIONAL SCREENINGS. For The First Time will be screened at the following venues: