PEP REVIEW: KC and Richard get a high-five in "For the First Time" 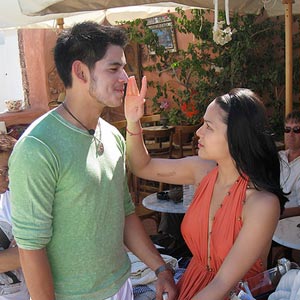 One of the most romantic scenes that Seth (left, Richard Gutierrez) and Pia (KC Concepcion) had in the beautiful island of Santorini. Notice the scar on Pia's right arm, she got it when she was 18, and it left a big mark on her life.

"Much is given, much is required."

This cliché applies to KC Concepcion and Richard Gutierrez in their real and reel life.

The real deal is both are prized talents of the country's rival TV giants. People automatically tag their first team-up with soaring expectations. Will they surpass the past and present love teams in terms of fan base?

Another thing, both of them belong to prominent families in showbiz. KC is the daughter of '80s matinee idol Gabby Concepcion and Megastar Sharon Cuneta, while Chard is the son of '60s matinee idol Eddie Gutierrez and "box-office star" Annabelle Rama. The pressure is quite arduous, especially for KC since it's her big screen debut. Will they win the hearts of the mainstream market?

The guy is very happy go lucky, and doesn't see the need to work hard to enjoy life's pleasures. He is a charmer, and literary became the boyfriend of almost every girl on campus.

The lady is very hardworking, and doesn't see the need to indulge in life's pleasures. She learned the meaning of the word "responsibility" the hard way when she was 18. She fell in love with a guy named Diego, and almost eloped with him. This severed her relationship with her dad, and left her with a scar.

Their love story happens in the scenic island of Santorini in Greece. The film has breathtaking cinematography. The bright white color of the houses and establishments is a great contrast to the deep blue sea and sky. The organic, stark, and beautiful architecture of the island is worthy to be considered as one of the world's man-made wonders. And the golden sunset is amazing.

Direk Joyce Bernal successfully captures the beauty of the place, and integrates a bit of the rich culture of Greece—like the traditional wedding dance and throwing of plates for good luck—into the movie.

And KC and Richard camouflage well with the picturesque backdrop.

Their first meeting in Greece is intentionally awkward that Seth ends up being tied to a chair. Pia recognizes him as the guy who broke the hearts of her girl friends, and makes no effort to hide her dislike. The guy pretends to be clueless.

But opposite poles attract each other, so, eventually, the two become close. Seth unleashes the fun side of Pia, while the latter gives substance to the former's outlook in life. They both realize they are not perfect, but the imperfections make them right for each other.

But love doesn't bloom in Santorini.

When the female lead returns to Manila, she is heartbroken. The plot thickens when she becomes the head of their family's real estate business, and she finds out that Seth is back. Things get so complicated that Pia's longstanding feud with her dad worsens.

Sans Santorini's picture-perfect setting, the two have to face their personal issues here and the challenges that will put their relationship to great test. In the end, love prevails!

The verdict: The charisma of the two is indubitable, and their chemistry is palpable.

But the movie's revelation is the acting of the two lead stars. Richard is surprisingly very good. The way he delivered his lines and his facial expressions have remarkably improved. He's also given his character transformation, from the easygoing to serious Seth, a smooth transition. His attack is so natural.

KC has done well in assimilating her character. She is very good at conveying her emotions. When she's happy, the viewers will find themselves smiling. When she's an emotional wreck, the viewers sympathize and even cry with her. There are a few times, however, when her voice is almost childlike. But her portrayal is moving.

Other characters with notable performance: Phillip Salvador and Candy Pangilinan, the sidekick of KC in the movie.

The former is surely a master of his craft. There's this confrontation scene between him and Pia. He doesn't need to say a line to evoke emotions.

Candy provides the comic relief. Wala siyang eksena na hindi ka matatawa. Her delivery is very good, and her timing is perfect. With her love interest in the movie, Nor Domingo, who happens to be Richard's sidekick, the famous '70s (some claim it's from the '90s era) line "Pendong ka riyan!" is revived.

The production and set designs are impressive—Pia's pad, her office; Seth's restaurant and the Villaraza mansion; even the brand new house of Pia's married friends, played by Jake Cuenca and Gee-Ann Abrahan.

Richard and KC's wardrobe are cool, except for the office attire of KC during the first part of the movie and the dress that she wore during a dinner with Richard. The choices do not flatter the slim figure of KC.

One thing the movie doesn't have but I sort of expected: An unforgettable line from Pia. Richard has a lot, but I can vaguely recall KC's dialogues.

Her scenes back here are very intense that it becomes difficult to determine which moment defines her caliber as an actress. Is it the emotional reunion with Seth in the mini-bar? Is it the confrontation with her dad? Is it the heartrending scene in the car after Seth left? At some point, the story has become a bit dragging.

Or it could be that I got so used to hearing quotable quotes from the Sharon movies I grew up with. Perhaps, I was waiting for something like, "Bukas, luluhod ang mga tala," or "Babangon ako't dudurugin ka."

But talking about the overall impact of For the First Time,it is worth watching!

How about KC and Richard?

Seth may be apt in his description: "You're not perfect. But that's the best thing about you." Or, that may even be a modest way of putting it.

For the First Time, directed by Bb. Joyce Bernal, is currently showing in cinemas nationwide.