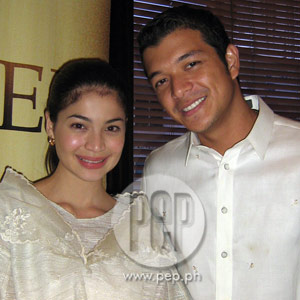 
In 1898, a band of Spanish soldiers heroically defended Baler in Aurora province against Filipino forces for 337 long and grueling days. The battle, now referred to as the Siege of Baler, is the setting of a forbidden love between an Indio soldier and a Filipina lass who lived at the end of the 19th century. This period film titled Baler is the official entry of Viva Films to the 2008 Metro Manila Film Festival (MMFF) this December.

Combining fact and fiction, Baler features the first team-up of Jericho Rosales and Anne Curtis. As Celso Resurrecion, Jericho is a half-Indio, half-Spanish soldier who is part of the 57-man rifle battalion that stubbornly holed up in the church of Baler. He and the other soldiers refused to believe that the war was over and in the process, they suffered from malnutrition and malaria.

Anne is cast as Echo's leading lady, Feliza Reyes, who is the daughter of Nanding (Phillip Salvador). As the head of the rebel group, Nanding is angry at Celso and the Spanish invaders. He cannot accept the fact that his own daughter could betray him by falling in love with the "traitor" Celso.

The grand press conference of Baler held earlier today, August 21, at the Bayview Salon of Hyatt Hotel in Malate, Manila was a Filipiniana-themed event with the men wearing Barong Tagalog and Anne (the sole female in attendance) wore an off-white terno.

According to Viva chairman Vic del Rosario Jr., this historical film has a budget of approximately P70 to P100 million. With many hours spent in doing research and the elaborate costumes and props to be used in the film, Baler is surely one for the history books. Direk Mark Meily even pointed out, "We are rebuilding the whole church, both inside and out, in the vicinity of Baler. We are rebuilding the town of Baler as it was 110 years ago."

Around seventy percent of the film will be in Spanish, which is why cast members have been studying the language as early as a few weeks ago. They are scheduled to shoot the film in Baler, Quezon, starting August 26.

Baler marks the first time that Echo and Anne will work together in a project. How did he prepare for this new team-up? "

LOVE SCENE. As lovers in the film, Jericho and Anne could not escape questions about their kissing scenes and their love scene in the movie.

"Pag may love scene, ang equivalent sa tenga ng tao, isang lust scene. But it's not, especially in 1898. Pinag-usapan namin ni Direk Mark on how to go about the scene and how we will execute that. As lovers, meron kaming napakagandang tagpuan and we have odds against us. Ang love scene ang maglilitaw sa pag-iibigan nina Feliza at Celso."

Since Anne is exclusively dating Sam Milby, is he okay with the fact that Anne will have a love scene in Baler?

"Of course, Sam knows and sa amin ni Sam, trabaho ‘to. We respect each other's art and each other's issue so walang issue dun."