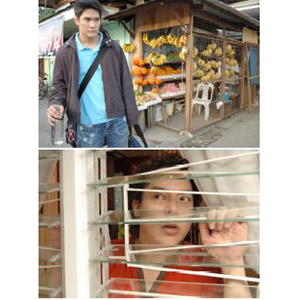 Luis Alandy (above) buys an enchanted bottle of lambanog that causes friction between him and his friends. John "Sweet" Lapus (below) also offers another bottle of the fermented drink created by a heartbroken woman.


An enchanted bottle of lambanog sparks friction among a group of friends during a drinking session. This is the premise of Paolo Herras' film that will be screened at Robinsons Galleria IndieSine from September 10-16, 2008.

Lambanog is the Filipino term for fermented coconut flower sap. This alcoholic drink is distilled from the sap of the unopened coconut flower and is known for having a typical alcohol content of 80 to 90 proof.


SYNOPSIS. Maria (Danica Sotto), a lovelorn lambanog vendor, casts love spells on her coconut wine, making the drinker remember his great love. College boy Mark (Luis Alandy) revisits his provincial hometown and bumps into Maria; captivated by her beauty and the mystery of her magic, Mark buys a bottle. That night, Mark serves the lambanog to his playboy best friend Eric (Lauren Novero), and Eric's girlfriend, Hasmin (CJ Mercado), a karaoke singer in a local restaurant.

Mark doesn't warn them that what they're drinking is enchanted. In every shot of lambanog, a love story is remembered. Later, they are joined by the demure gay landlord Rico (John Lapus) who brings another bottle of lambanog, also from Maria. As the alcohol level gets high, Maria's call for love becomes a curse as secrets are exposed and the truth of their sordid interwoven lives are revealed.


When one drinks from the bottle of love, the truth it brings could end as a bad hangover.

Paolo Herras, 26, is currently taking his masters in Philippine Studies, Major in Film at the University of the Philippines. A graduate of BA Comparative Literature, Paolo's first full-length script, P1.00/MIN (One Peso Per Minute) won the 3rd Prize of Star Cinema's 1st Scriptwriting Contest.

He has written and directed two films: Lambanog (Coconut Whiskey); and Rekados (Special Ingredients), an official entry to the 2nd Annual Cinema One Originals. Paolo is currently developing his third film, The Fortuneteller, supported by the National Commission for Culture and the Arts.


Tickets of Lambanog are priced at P120.