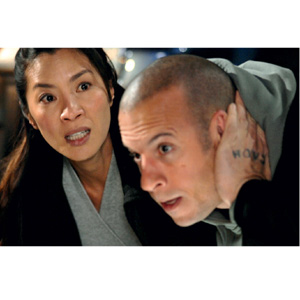 Vin Diesel stars in the futuristic action extravaganza Babylon A.D. as Toorop, a mercenary-for-hire in a world made for hardened warriors. Diesel's role as Toorop takes on a mysterious young woman named Aurora (Melanie Thierry) along with her guardian sister Rebeka (Michelle Yeoh) to be transported from Kazakhstan to New York City.


Toorop faces obstacles at every turn and is tested like never before, in ways he could have never imagined-as he comes to understand that he is the custodian of the only hope for the future of mankind. For the first time, Toorop has to make a choice: to make a difference or walk away and save himself. Toorop's arsenal of futuristic weapons includes a satellite phone with an encrypted data communication system; a military GPS, accurate to one-inch; tactical multi-media goggles; and a thermo-electric interactive map. But his most important weapon is a code of ethics, unknown in his profession, and from which he will not veer.

"Toorop has a very strong personal code and I was attracted to that part of his character," says Vin Diesel. "Toorop lives by his own personal codes of conduct, but allows the lines to blur in order to get his job done. This is a lesson he learned while in the military. In the film's opening scene, you see Toorop at the marketplace, and he goes from threatening a guy who owes him money at gunpoint to promising to bring a hungry kid food. He uses physical force in order to effectuate his professional needs, but in his heart he is a generous man."

While Babylon A.D. presents scenes of epic action and set pieces, Diesel was drawn primarily to Toorop's complexities. "I approach each project from the perspective of the character first," Diesel explains. "He is a war veteran who has both committed and witnessed such horrible atrocities that he has completely given up on life, on love, on hope, and has become a shell. But then you add on the fact that this guy has these incredible survival skills and he has been asked to protect the world's first "replecant" who is also being protected by the likes of Michelle Yeoh! That is when the film becomes epic in scope."

Director/co-screenwriter Mathieu Kassovitz (La Haine), a noted actor in his own right (he had a leading role in Munich), cast Diesel because he knew the actor could handle the requisite action duties while adding critical character shadings. "Toorop is a classic anti-hero, but he has ethics and a code," says the filmmaker. "That's why I chose Vin; he's an action hero but at the same time he allows us to explore the layers of Toorop through the adventure he undertakes with Rebeka and Aurora."

The full-throttle action scenes makes everything in the film bigger than life: cars are airlifted by giant electric helicopters; warriors square off in vicious combat inside a "fight cage;" snowmobiles fly through the air while exchanging gunfire; missiles shoot through the streets of the Big Apple; and video commercials are everywhere because televisions cannot be turned off-you can only change the channel.


Noted French action fight man Alain Figlarz (The Bourne Identity) heads some of the major stunt team in the movie. Figlarz worked closely with Diesel on the fight scenes.

"Toorop is a skilled fighter whose training comes from years of war. "The challenge for Alain and me was to come up with a style that would be unique to this character, would represent a military fight style, but also the street. In defining his fight style, we wanted to create a look that is consistent with a guy who also uses guns and weaponry easily, but who is adept at hand to hand. In essence his fight style had to feel effective, but not overly choreographed."


Vin Diesel also notes that this sense of reality sets the film apart from other science fiction epics. "Babylon A.D. is set in the very near future, on earth," says the actor. "This sort of setting allows you to think freely about what life could be like in a different time while also giving you a sense of reality. In essence, by setting it in the near future, you have an easier time getting your audience to suspend belief for a minute, while you introduce them to a world where the limits have been pushed to the maximum."