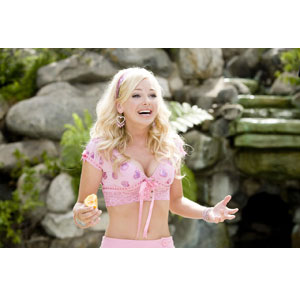 A Playboy Bunny named Shelley (portrayed by Anna Faris) teaches sorority girls how to be cool girls on campus. This comedy The House Bunny will tickle the funny bones of viewers courtesy of Columbia Pictures, local office of Sony Pictures Releasing International.

"What happens to the people who have lived in the surreal Playboy Mansion world, where it's parties and fun all the time? And why do they leave that world—do they get too old, or are they simply ready to move on to a different phase in their lives?" asks Anna Faris, the star of Columbia Pictures' new comedy The House Bunny, which focuses on Shelley, a Bunny who is facing that exact crisis.

Produced by Adam Sandler's Happy Madison Productions and written by the same team that brought audiences the feel-good comedy Legally Blonde, The House Bunny tells the story of Shelley Darlington (Faris), a Playboy Bunny who teaches an awkward group of college girls about the opposite sex—only to learn that what boys ultimately want is what's on the inside.

"Shelley has spent her whole adult life living in the Mansion, but when she gets booted out, she's completely adrift," says co-screenwriter Kirsten Smith. "We took that idea and spent a few months ruminating over where she would land, and we finally came up with the idea that she should enter the world of a sorority—a misfit sorority that desperately needs her help," adds co-writer McCullah Lutz.

When Shelley first meets the girls, they are in danger of losing their house, due to a dearth of pledges. "Shelley has this idea that if she changes the Zetas into super hot girls, then they will be able to get guys and if they can get guys, they can get pledges and keep their house," Faris explains.

"She teaches the girls how to be cool and cute and popular, that's definitely true, but for Shelley, it's all about self-confidence," Lutz continues.

But the Zetas are not the only ones who make transformations. At the beginning of the film, most people—including Shelley herself—see the Bunny as "just a Bunny." According to Lutz, "Shelley defined herself as a Bunny and thought that was all she was capable of. She only defined herself in terms of her value as an object for male eyes. But then she learns she has more inherent talents and a bigger purpose in life than just being a Bunny."

"It's not just a message for girls, but everyone learning to accept themselves and love themselves for who they are," says Faris. "When we first meet Shelley she may think she's the hottest girl, but she learns to realize that how you look is not important—it's about how you look at yourself."

Producer Heather Parry says that although The House Bunny is Happy Madison's first female-driven comedy, it shares the same underlying comedy goal. "It's funny and it has heart," Parry says. "Every girl goes through a time in her life in which she tries on new looks and new attitudes and The House Bunny looks at that time in a really funny and charming way."

Opening soon across the Philippines, The House Bunny is distributed by Columbia Pictures, local office of Sony Pictures Releasing International.