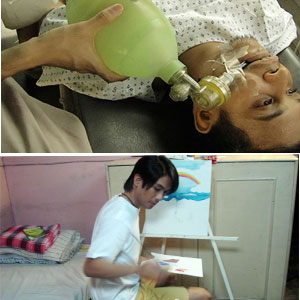 Richard Legaspi's Ambulancia (above) and Seymour Barros Sanchez's Shorts (below) will represent the Philippines in the Bite the Mango Film Festival. This filmfest will take place at the United Kingdom from September 19 to 25, 2008.

Richard Legaspi's Ambulancia and Seymour Barros Sanchez's Shorts were selected for screening in the Bite the Mango Film Festival, which will run from September 19 to 25 at the National Media Museum in Bradford, West Yorkshire, United Kingdom.

As part of the official selection, both short films are eligible for the Golden Mango Award, which will be awarded to "the film that is considered the best contribution to the promotion of cross cultural awareness, educating the audience about different cultures."

Festival director Addy Rutter relayed the good news via email to both directors, who are both part of the Katorse Writers Group, a collective of filmmaker-writers from Ricky Lee's 14th scriptwriting workshop. Incidentally, Ambulancia and Shorts got the first and third prizes, respectively, in the second Viva-Pinoy Box Office Digitales.

Since its inauguration in 1995, Bite the Mango has been growing and defining its identity in the world. Conceived as a festival that would profile the work of black and Asian filmmakers in Britain, it has quickly evolved into a celebration, through film, of cultures around the world. At present, the film festival is at the forefront of working with other countries and people to find the latest and best of world cinema.

Bite the Mango will be showcasing an eclectic mix of features, shorts and documentaries and a selection of master classes, seminars and workshops delivered by industry professionals providing an exciting and culturally vibrant atmosphere. The festival will again be bringing audiences an impressive collection of the very best cinema from around the world drawing influences from Africa, South Asia, Central America and the Far East.

Shorts, a comedy shot in the form of a "mockumentary," tells the story of Richard Marquez, a young, hotshot copywriter/production designer of one of the country's top advertising agencies, who suddenly "snaps" or seems to have snapped as relayed by people close to him. He seems to be doing anything to make his new shorts dirty to the fear of everyone. It stars PJ Lanot, Nora Ruth Aquino, Jhovannie Santos, John Emmanuel Bautista, and Andy Del Rosario, with cameo appearances by award-winning actress Gina Pareño as well as directors Jeffrey Jeturian and Sockie Fernandez.